Mayor of the Liverpool City Region, Steve Rotheram, has unveiled a radical plan to deliver real levelling up for the region – creating thousands of new jobs and improving life chances for its 1.6m residents.

Underpinned by more powers and greater funding, the Plan for Prosperity presents an exciting vision of economic growth up to 2035 – with the creation of more than 50,000 new jobs.

Innovation, skills, high-tech and low-carbon industries, tidal power and the Freeport are high on the agenda, with an overarching ambition to diversify the city region’s economy, boost productivity, and maximise its overall contribution to the UK economy.

“For too long, too many people have been left behind by an economy that simply does not work for them. I want the Liverpool City Region to be at the forefront of the movement for a better way of doing things.

“This plan outlines my bold vision for a fairer, stronger and cleaner city region – one that doesn’t just look to boost the bottom line, but boost people’s life chances.

“For me, true prosperity is about much more than traditional measures of economic growth. It means better personal health and wellbeing, proper access to opportunity and well-paid secure work; the chance to live in safe, thriving neighbourhoods; and in a flourishing natural environment.

“This is the true meaning of ‘levelling up:’ a place where no one or no borough is left behind and meaningful opportunity and equality is shared by all. Devolution is all about doing things differently and, in radically changing the face of our economy, we’re taking full advantage.”

The Plan for Prosperity knits together the ambitions and priorities required to address the key challenges of the 21st century, such as health-related economic inactivity, too few high-quality jobs, and outdated, carbon-intensive ways of living, working and getting around. 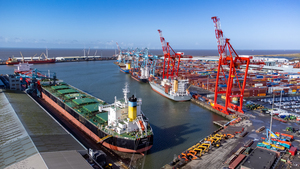 Central to the proposals is building on the success of the region’s science hubs at the £1bn Knowledge Quarter Liverpool and Sci-Tech Daresbury, as well as the pioneering Hynet North West hydrogen fuel switching programme, and Glass Futures, a global glass innovation and industrial decarbonisation centre in St Helens.

The city region will also capitalise on its existing world-leading strengths in industries such as infectious disease control, materials chemistry, and applied artificial intelligence.

These sectors will play a significant role in helping the region to meet its goal of spending the equivalent of 5% of the local economy on Research and Development each year by 2030. This would represent an investment nearly double the UK target, adding a £19.7bn boost to the economy, 44,000 new jobs, and a 10% uplift in productivity.

Meanwhile, the city region’s new Freeport status is forecast to create up to 14,000 jobs, with an estimated economic impact of £850m as part of a broader plan to increase the region’s export level by 10%.

Building on the success of Be More, the country’s first UCAS-style careers website which recently expanded to help 10,000 people learn fresh skills or find new careers, the region seeks to prioritise the retention of its highly skilled local workforce. This includes a particular focus on encouraging more of the city region’s 57,000 annual graduates to build a career in the area.

Looking to the future, the plan sets out the region’s intention to become the UK’s renewable energy coast, exploiting its natural assets and advantages in renewable energy through wind, tidal and hydrogen.

Plans are already well underway to build a fully integrated London-style transport system, that will make travelling around the region quicker, cheaper and more reliable. It is hoped that this will help better connect communities with each other and with opportunity.

By 2035, the plan aims to have unlocked the potential of people and places by helping to cut inequality and deprivation and creating a more inclusive resilient economy and a healthier population.

“He’s a true inspiration to others.” Mayor meets the 14 year old making...
Scroll to top
Contact us
×
Media enquiries
×