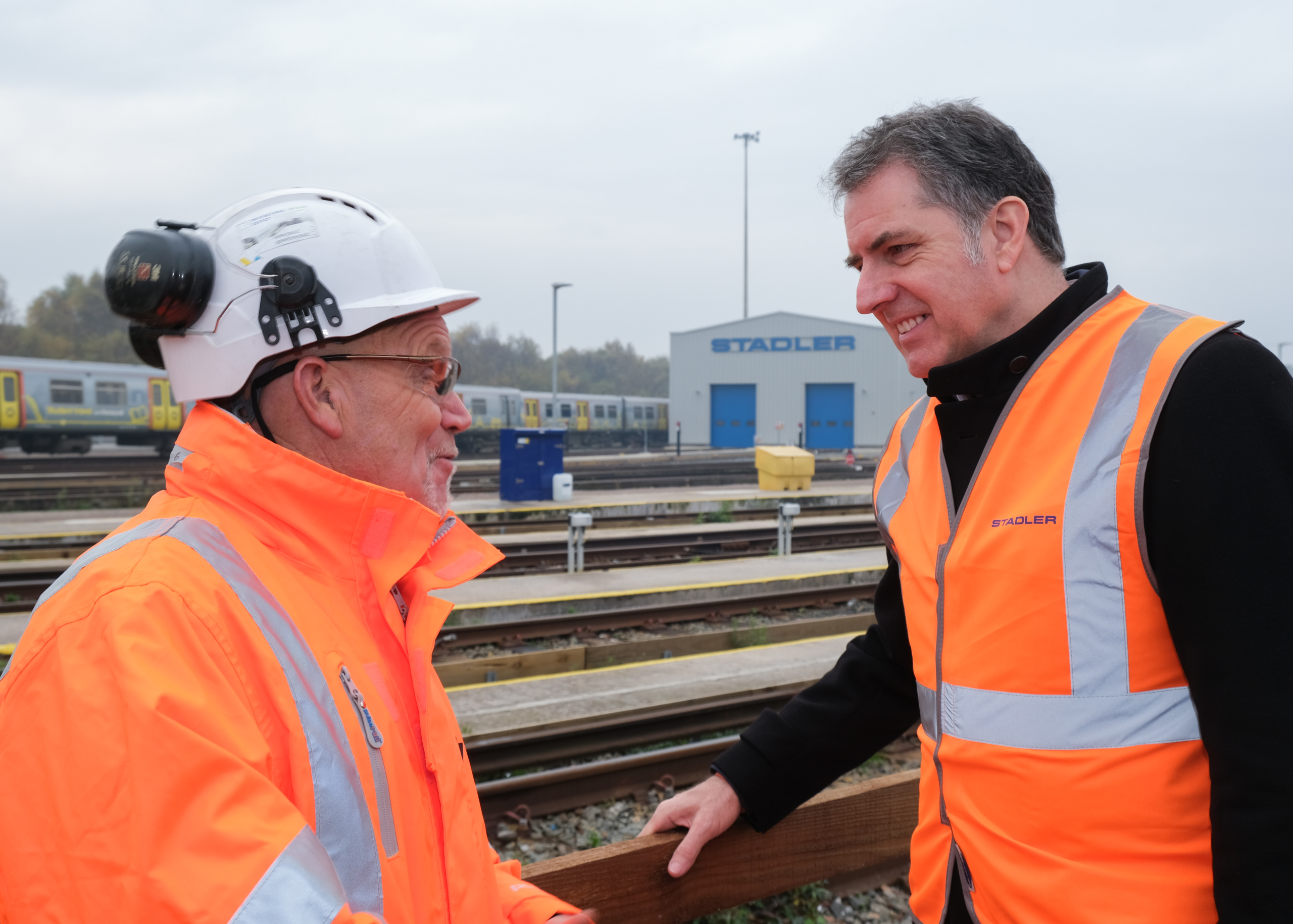 Steve Rotheram thanked workers at Stadler Rail depot in Kirkdale for their efforts in helping to bring new state-of-the-art trains to the Liverpool City Region.

The £21m re-build of the depot facilities began in 2018 and is part of the £460m being invested in the new trains and related infrastructure.

The newly upgraded depot includes washing and heavy maintenance capabilities as well as stabling room for 30 of the new eight car trains. The facility is also equipped with 24-hour CCTV and secure access controls.

During a visit to the depot last week, the Mayor met with some of the team who were part of the depot building project as well as some of the newly-qualified Stadler engineering and maintenance apprentices who will be working on the new trains.

Steve Rotheram, Liverpool City Region Metro Mayor, said: “In the Liverpool City Region, we’re trying to build a fair and inclusive economy where the benefits of jobs and investment are felt within our communities, rather than by shareholders – that means we’re committed to using as much local talent and expertise as possible.

“The new trains will massively benefit rail users, but I’m really keen that their impact is felt across the region. This new depot will go on creating high-quality local jobs for years to come as part of a 35-year contract to maintain and upgrade the new trains.”

The Combined Authority has worked to maximise the use of regional talent and expertise in the new trains project, including holding supplier days to encourage bids from local firms. Over three-quarters of the team working on construction of the depot are residents of the Liverpool City Region, while two-thirds of all specialist sub-contractors are from within 50 miles.

John Costello, safety critical supervisor at BAM Nuttall, said: “As a local person with very specific training and expertise, it is fantastic to work on a project that uses my skills and is relatively close to where I live.

Developments like Kirkdale depot are fantastic for the city region. We should do all we can to ensure that local people are involved in them so that the benefits of local investment are shared across the board.”

The Kirkdale depot is now also the home of Stadler’s UK headquarters. Once the new trains enter passenger service, the majority of the company’s UK workforce will be based at this site. Stadler also has a second depot at Birkenhead North, where the existing fleet is maintained. The Swiss rail-builder has a contract to service the new trains for 35 years, providing jobs in engineering and maintenance.

Jenny Corkill, newly qualified apprentice technician at Stadler, said: “’I was very pleased that straight after completing my apprenticeship course at Stadler, I was offered a permanent post within the business.

The training has prepared me well for a career on the railway, and I am delighted that I could immediately benefit from it by securing a decent job in the Liverpool City Region.”