Metro Mayor Steve Rotheram has announced the launch of a new £30m partnership that will help make the Liverpool City Region the most digitally connected area in the UK and ultimately lead to a £1 billion boost to the local economy.

Work has already begun on a 212km full fibre, gigabit-capable network infrastructure that will help position the region at the head of the next digital revolution.

Half-owned by the city region’s Combined Authority, headed up by Mayor Steve Rotheram, the full fibre infrastructure will be capable of delivering speeds of 1,000mbps and beyond.

The LCR Digital Infrastructure Project is a joint venture half-owned by the Liverpool City Region Combined Authority in partnership with North West-based ITS Technology Group, who will lead the project, working alongside construction partner NGE, who are managing the build and roll out of the network.

Alongside existing local digital infrastructure, the new fibre optic network will help position the city region as a world leader in digital technology.

Experts estimate that with 100% full fibre coverage across the City Region, building on this network, the economic boost could be worth up to £1bn, creating thousands of local job and training opportunities. 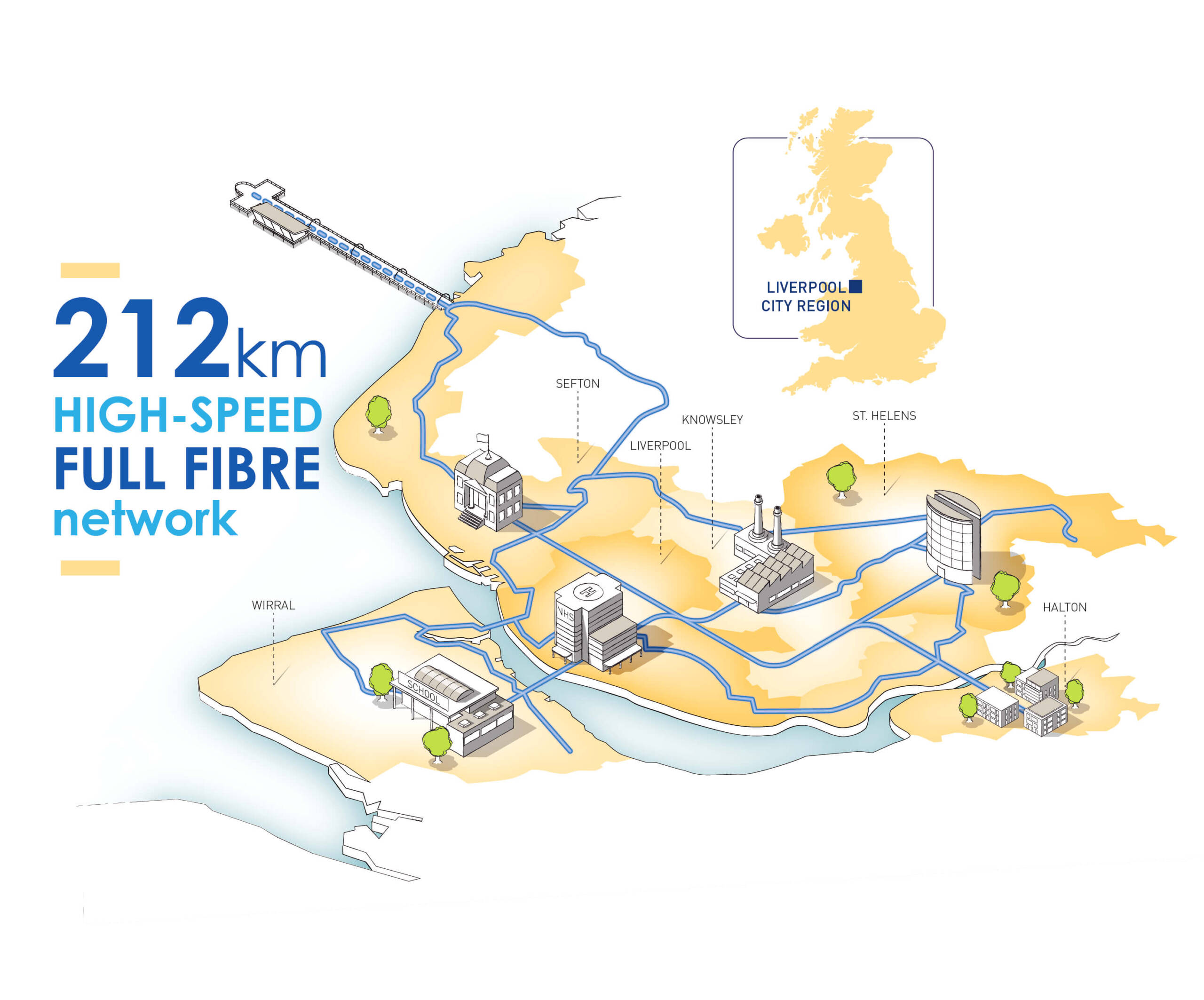 “When I was elected, I made it a priority to make our region the most digitally connected anywhere in the country. Today we take a major step towards that, with the launch of this exciting partnership.

“Our region was at the heart of the first industrial revolution, and I believe that this project can help us be at the forefront of the fourth industrial revolution, creating thousands of jobs and ultimately generating £1bn for the local economy. It will make us leaders in the industries of tomorrow and will help us attract talent and investment from around the world as others look to take advantage of our skills, infrastructure and expertise.

“Local people and businesses will feel the benefits too – in the form of significantly faster speeds as well as the jobs and training opportunities, although the Government still needs to tackle the problem of digital exclusion.

“And, best of all, it will all be 50% owned by us so we can continue to reap the benefits for years to come.

“As we have done so many times before, this is our region seizing the initiative, leading the way and crafting what I hope will be a lucrative and successful new future that everybody in our region can benefit from.”

In its initial phase, the consortium will create a resilient fibre ‘backhaul network’, connecting three transatlantic cables and major economic clusters in each of the Liverpool City Region’s six local authority areas.

Digital infrastructure will be installed in carriageways, footpaths and cycle ways across the city region over the next two years, using innovative deployment techniques to minimise the impact on road and public transport users wherever possible.

“Being digitally connected is more important for our region than ever before so I am pleased we are moving at pace with this important work.

“This is a transformational project, one which will not only help our city region recover from COVID-19 but help us rebuild our economy better than before. Gigabit-capable connectivity creates a huge opportunity for those living and working in all six of our boroughs, through attracting global companies and industries and creating more jobs.”

“ITS is delighted to be awarded this contract and be part of the team rolling out full fibre across the Liverpool City Region. This programme will have a transformational effect for everyone in the region and we are excited to be playing a central role in its delivery.

“As shareholder partners in the Joint Venture we are proud to be contributing significantly to the tremendous growth in the digital economy of the region, and supporting national targets for full fibre access by 2033.

“The awarding of the contract further confirms ITS’s place as a leading next generation network provider in the UK focused on helping businesses develop in the digital age. ITS with its expert team has a track record in deploying and managing gigabit capable full fibre networks, that help to drive innovation and productivity.”

“NGE is proud to be part of the joint venture appointed to support the transformation of Liverpool City Region. Our local subsidiary – NGE Contracting – has won a project that will shape the city. We bring to the JV our expertise in infrastructure financing (through NGE Concessions) and our capabilities in the implementation of a high quality digital network (through NGE Infranet).

“Using labour and resources from within the Liverpool City Region, this project is also a fantastic opportunity to deploy our infrastructure development and finance expertise in cities across the UK such as Liverpool.”

“The powerful computing capability at the Hartree Centre underpins our work with a range of companies to help them benefit from advanced digital technologies. This faster connectivity infrastructure will allow us reach even more companies and support their growth.  A number of companies have already co-located at Sci-Tech Daresbury, including IBM Research. Being linked to one of the fastest digital infrastructures in the country is a strong incentive for additional SMEs and larger companies to expand their presence in the region.”