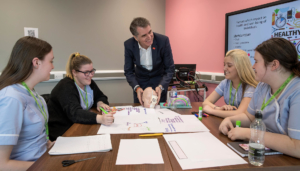 Metro Mayor Steve Rotheram has announced the creation of a Youth Advisory Group as part of the Liverpool City Region Combined Authority’s response to the Covid-19 pandemic and its impact on young people.

The group, which is open to young people from the ages of 13 to 18 (or 25 if they have special educational needs and/or a disability), was established during a virtual meeting today (Wednesday 3rd June 2020) where young people from across the city region discussed their experiences of the Coronavirus pandemic, and their hopes for the future, with the Metro Mayor.

Feedback from the new group will be used to inform policy-making as the city region starts to build back better, as well as feeding into the Metro Mayor’s discussions with Government in response to the significant social and economic challenges caused by the crisis.

The group will consider and advise on a host of other issues relevant to young people such as employment, skills, the environment, culture, transport, mental health and wellbeing.

“Too often young people are excluded from the debate when politicians are making decisions. Yet they have to live with the consequences of those choices the longest.

“As Metro Mayor I want to do things differently and ensure that their voices are heard loud and clear when it comes to shaping the future of our region.

“Young people are amongst the most impacted by the effects of the COVID-19 virus on our country, with schools and colleges closed, exams cancelled and huge uncertainty over their future hopes, fears and aspirations. My Young People’s Advisory Group will explore those concerns and address them as we respond to the significant social and economic challenges caused by the crisis and look to build back better.”

Liverpool City Region has significantly more child poverty, lower educational attainment and higher rates of poor mental health amongst its younger residents than compared to the national average. These factors point to younger people within the city region being disproportionately likely to feel the negative effects of the coming recession.

14 year old Alex Leedham took part in the virtual conversation and is looking to join the Metro Mayor’s Advisory Group. He said:

“I’m concerned about how long it is going to take for our schools and extra-curricular activities such as drama groups or sport to recover from this crisis and consequently how that is going to affect me and other young people as we look towards careers, apprenticeships and further education. I welcome the opportunity to have my opinions heard as a young person planning my future.”

END_OF_DOCUMENT_TOKEN_TO_BE_REPLACED

£180m of Existing Liverpool City Region Schemes that will help drive our Economic...
Scroll to top
Contact us
×
Media enquiries
×