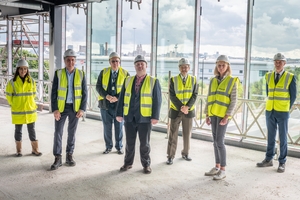 Metro Mayor Steve Rotheram joined local business and political leaders to celebrate the topping out of the Hythe – the new Grade A business hub at Wirral Waters.

The ceremony marked reaching the highest point in the construction of the ‘next generation’ office building at No1 Tower Road South, Wirral Waters, which now stands at 15.3m.

Developed by Peel L & P, and supported with £3m funding from the Combined Authority, the Hythe is the first speculative office development in Birkenhead for over a decade.  So far, more than a million pounds of the building costs have been spent on Liverpool City Region based construction supply chain companies.

“We’ve invested £3m in the Hythe site to ensure that we’re able to keep offering outstanding facilities and as a catalyst to attract new businesses and jobs to the area. It’s great to see that investment starting to physically take shape.

“Not only will these new facilities offer some of the most advanced office space in the area, they will also be some of the greenest and most sustainable. I’m sure they’ll help make our region a more attractive place for jobs and investment.”

Developed by Peel L & P, and supported with £3m funding from the Combined Authority, the Hythe is the first speculative office development in Birkenhead for over a decade.

“Hythe combines first class office space with exceptional views, which in turn will attract new businesses and lead to job opportunities for people in Wirral. This development is a critical part of transforming this area into a thriving neighbourhood which will welcome people to live, work and learn.”

Hythe was designed by award winning architects, Glenn Howells, to maximise on stunning panoramic views, showcasing both the Wirral Waters waterfront and Liverpool City skyline. It is being constructed by GMI Construction with completion expected in late 2021.

It offers over 25,000 sq ft over three floors of high quality, flexible office space for entrepreneurs and local businesses. It has been designed to maximise the health and wellbeing of workers and sets new standards in sustainability with a BREEAM-Excellent rating, which will place it in the top 10% of all buildings for its green credentials. Hythe has also been designed to accommodate the latest innovations in digital connectivity.

Hythe was named after the Old English for ‘a landing place or small harbour for ships or boats’ and uses contemporary design to maximise health and wellbeing, offering a haven for entrepreneurs in the heart of Wirral Waters.

Lettings are now available for businesses wanting to be the first to relocate to Hythe. Business should contact lettings agents Matthews & Goodman and Avison Young for further details.