Glass Futures will put the Liverpool City Region at the forefront of decarbonising the global glass industry, an event at COP26 in Glasgow has heard today. 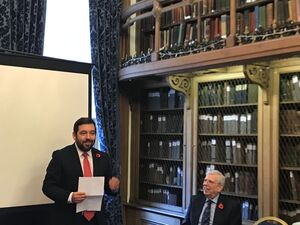 Councillor David Baines, Liverpool City Region Combined Authority’s Portfolio Holder for Climate Emergency and Renewable Energy and Leader of St Helens Borough Council, told the event how the £54 million project will create the world’s first openly accessible test and trial furnace facility, which will be used to deliver industry and government-backed R&D projects focused on decarbonising glass production, and also providing a platform for industry to test and trial their own commercial ideas on a state-of-the-art line, both collaboratively and individually.

Based in the traditional centre of the UK glass making industry in St Helens, Glass Futures is a unique, industry-backed Research and Technology Organisation, leading collaboration across some of the largest companies in the global glass industry and its supply chain, together with academia and local and central government.

“I am here this morning, as the Liverpool City Region’s Portfolio Holder for Climate Emergency and Renewable Energy. However, as Leader of St Helens Borough Council, I have a particularly keen interest in this project.

“And that is why am here today, to show clearly and unequivocally support for Glass Futures – on behalf of myself, St Helens Borough Council and the Combined Authority.

“The natural global home of glass production is St Helens, where the float glass process was first pioneered by the Pilkington brothers.

“And with Glass Futures, we have the opportunity to catalyse the rebirth of an industry – that puts the town on the international innovation map once again.

“This is about reinventing global glass production innovation back in St Helens – in a 21st century setting.”

Project delivery is led by Network Space on behalf of an innovative partnership created between Glass Futures, the global glass supply chain, Network Space, St Helens Borough Council, the Liverpool City Region Combined Authority and UKRI (UK Research and Innovation). This dynamic and fast-moving partnership has rapidly turned the Glass Futures concept into a worked up and deliverable scheme in less than two years.

The project will be funded through a mix of public and private investment.

“I’m going to COP26 as a voice for the 1.6m people who call the Liverpool City Region home, to demand urgent action from global leaders to help us transition to net zero as quickly as possible.

“As a local leader, I’m making sure that our region is leading by example. We were the first region in the country to officially declare a climate emergency and our ambition is to hit net zero at least a decade before national government targets.

“We’re making investments now to make sure that happens: in hydrogen buses, efforts to build a London style transport system that gives people a proper alternative to the car, and developing plans to harness the River Mersey to generate clean, predictable energy.

“But we know that we cannot do it alone, so we’re building partnerships and working collaboratively with the private sector to help us reach our goals. Recently we’ve seen that approach bear fruit with the recent news of Ford’s £230m investment in Halewood and the success of Hynet in being chosen as a pilot scheme for carbon capture and hydrogen production.

“There is no silver bullet for tackling climate change. Instead, lots of actions taken together will make the difference. Our region is doing as much as we can to play our part.”

The project has been awarded a £9m grant from the Liverpool City Region Combined Authority and secured a £15m UKRI grant to support the installation of a globally unique, experimental furnace and state of the art infrastructure, capable of melting 30 tonnes of glass per day in a safe experimental space. Glass sector companies will also contribute a further £20m in resource, time and equipment to support the project.

St Helens Borough Council will take a head lease of the building to facilitate the development and deliver a green recovery.

“The Glass Futures facility will develop and demonstrate new technologies for reducing environmental impact and improving the productivity of glass manufacturing processes, plus potentially that of other foundation industries.

“Ranging from new raw materials and novel glass compositions, to alternative fuel sources and furnace designs, to waste heat recovery and carbon capture, Glass Futures will support our aim to become net Zero Carbon by 2040 – a full decade ahead of the rest of the country.

“What we’re doing here will benefit St Helens, the Liverpool City Region, and the UK for decades to come – and will once again make the world sit up and marvel at the pioneering spirit that we know never left our region.”