The event is part of The World Reimagined, a ground-breaking, UK-wide art education project that uses specially designed globes to change understanding of the transatlantic slave trade and to promote racial justice.

Open to the public, the event brought together 40 learning globes, created by schools and community groups, which examine issues related to race and the ongoing legacy of the transatlantic slave trade. 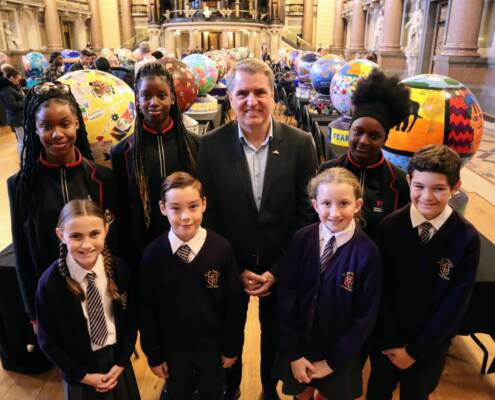 Steve Rotheram, Mayor of the Liverpool City Region, met children and young people from 20 schools, who attended the event with the globes they created.

The World Reimagined project also features 10 large globe structures, created by artists, making up a free public art trail across the Liverpool City Region. The project brings to life the reality and impact of transatlantic slavery and invites the public to think about ways to make racial justice a reality.

The trail has been running from mid-August and will continue until October 22, when all 10 large globes, which have been located around the city region, will be brought together in Paradise Street in Liverpool city centre.

The 41 learning globes, created by 30 schools and 11 community groups, have been available to view at public locations across the Liverpool City Region.  (All but one of the globes were brought together at St George’s Hall.)

The project has been brought to the region by the Liverpool City Region Combined Authority, as the main local sponsor.  The Combined Authority has worked very closely with the region’s six local authorities and other partners including National Museums Liverpool and other cultural and community organisations, to deliver activities across the entire city region.

“The World Reimagined has been a timely and important reflection on our region’s history and celebration of its present-day diversity. The energy, excitement and outpouring of ideas we’ve seen from local schools and community groups has been phenomenal.

“As we mark Black History Month, I really enjoyed meeting some of the children who worked so hard to help build our 41 learning globes – more than anywhere else in the country – and hearing what they have learned as part of the process.

“The transatlantic slave trade was a dark chapter in our region’s history but by educating ourselves and stimulating these conversations about the past and future of our region, we are ensuring that the next chapter we write is as vibrant, inclusive and successful as possible.

“More than 1.6m people call our city region home – and I want to work in alongside our communities to build a brighter future for our area – where no one is left behind.”

The project forms part of the Liverpool City Region Combined Authority’s Race Equality Programme, which was launched by the Mayor in 2020.

The region-wide trail has been at the centre of a broader learning and engagement programme, with schools, community groups, and cultural institutions from across the city region taking part.

Through the education and art programme, the project has been rooted in local schools and communities to facilitate dialogues around racial equality and justice and linked deeply to where people live.

“What is so wonderful about this project is that it has given opportunities for young and old alike to come together and learn from each other, not just about our history and its impact, but how we can make a difference if we work together with compassion and respect. The creativity on display is stunning and it was fantastic to see the learning globes together like this in such an iconic venue.”

“This has been a hugely ambitious and thought-provoking project which has helped us all think about the ongoing legacy of the transatlantic slave trade.

“Locating all of these globes across the city region has helped the project reach as many people as possible and kickstarted a public conversation about the legacy of our city region’s past and its continuing consequences today.

“It is also a celebration of creativity and the power of culture to challenge, entertain and educate.  Bringing together so many of the learning globes in one place with the people who created them really brings home the impact of this exciting and innovative project.”