The trial scheme which is delivered in partnership with the Liverpool City Region Combined Authority and Liverpool City Council has proven to be one of the most popular and successful in Europe. In recognition of this, the e-scooter trial extends until March 2022.

The icing on Voi’s birthday cake is that a recent user survey showed 42% of Liverpool’s rented e-scooter users have replaced a car journey as a result of having access to this shared micromoblity scheme. 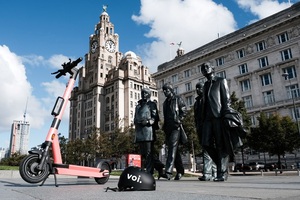 Since October 2020, scooter Liverpool’s residents and visitors have covered nearly 2.3 million miles on over 1.4 million rides on the vehicles, with one in four riders using them to get to work, and the rest going to the gym, shopping or meeting up with friends. Since the trial began, an estimated 600,000 short car journeys have been replaced for trips around the city by people using Voi e-scooters, reducing over 328 tonnes of C02 eq. from being released into the atmosphere.

Like many towns and cities across the UK and Europe, the city has welcomed the region’s transition to a new, convenient and low-carbon way to travel. Seven in ten of Voi users in Liverpool say e-scooters have made it easier to move around the city. In addition, 72% of riders in Liverpool say they use e-scooters regularly, many to have easier access to public transport.

Today’s celebration is recognition of Voi’s commitment to working closely with the local police, Liverpool City Council and Liverpool City Region Combined Authority over the last 12 months, introducing measures which place education around safety, parking, and sustainability at the forefront of the e-scooter experience.

For example, Voi invested in new parking bays and introduced city-wide mandatory parking zones to prevent street clutter, while also collaborating with the Royal National Institute of Blind People (RNIB), and other disability organisations, to ensure these parking facilities are visible to protect vulnerable people.

As a result of this vote of confidence, Voi has nicknamed the city ‘LiVoipool’ for making shared micromobility an important part of everyday life in the region.

“We’re delighted to be celebrating our first anniversary in Liverpool, and would like to thank our riders, colleagues and the local authorities for their support in making e-scooters a success in the region.

“We’ve helped thousands of people in the city make more environmentally-friendly choices by working closely with Liverpool City Region Combined Authority and communities to embrace e-scooters as part of everyday life. We look forward to continuing our journey with Liverpool in creating healthier places to live.”

Making e-scooters accessible to all is also part of Voi’s inclusivity strategy, and it welcomes the recent collaboration with Google Maps, which enables people to plan a multimodal trip using Voi e-scooters. Indeed, sustainability, accessibility and affordability are three of the main reasons why Liverpudlians are opting for Voi e-scooters and, as it moves into its second year of operation, Voi will continue to build on making cities better places for everyone to live.

Liverpudlian Voi user Patrick Regan, 51, who works in IT said:

“I like the freedom offered by the Voi scooters, it’s environmentally friendly and also an enjoyable method of getting about. It’s very accessible for small journeys with excellent availability. They are almost on every street corner in the centre of town. I live up a hill from town and often use Voi scooters to take the drudge out of the hill climb. I also find them excellent as a means to get across town if I’m running late for an appointment or meeting.”

One of the big highlights of the last year for Voi was being able to offer free Day Passes to NHS staff and emergency workers during lockdown. During this period, over 175,000 rides were taken for free in the region. As part of its ongoing inclusivity and social equity policy, Voi continues to offer discounts for those on low income, vOI 4 all, NHS and emergency service workers, Voi 4 heroes and other discounted passes.

In addition, Voi is offering new students in the city, and those who are new to Voi, 50% off a Voi Day Pass. They just need to add the code STUDENTSUK50 to the Voi wallet before their first ride (see terms and conditions below).

“I think Vois are a really good thing and I hope we get to keep them. I hope they become a permanent thing and become part of the cultural fun. They are making a really good contribution to Liverpool. I make music as well, so music venues would be on one side and then you’ve got the shops on the other and the business on another. It’s just really easy to just nip in between the areas on an e-scooter.”

“The e-scooter trial in Liverpool has proven very popular and successful so far with well over a million rides taken so far. Research also suggests that many of these have been replacing car journeys, helping reduce congestion and cut harmful emissions in the city.

“The Combined Authority, and our partners at Liverpool City Council, have worked closely with Voi throughout the trial to improve the scheme and respond to concerns raised, introducing new measures like mandatory parking bays and slow and no-riding zones to improve safety.

“With the trial set to continue into next year, we look forward to further exploring how e-scooters could become a more permanent part of the sustainable, London-style transport network the Metro Mayor is building in the Liverpool City Region.”

“I am pleased that the scheme is continuing to evolve, and that we have further opportunity to help shape the e-scooter experience, not just in Liverpool, but internationally too.

“My focus remains ensuring the safety for riders, other road users and pedestrians in Liverpool, and we will continue to work closely with Voi and partners at the Combined Authority to respond to any concerns and adapt the scheme if required.

“The principles of equality and inclusion, social value and responding to the climate emergency is part of our triple lock approach to all decision making, so improving access to sustainable and affordable travel for residents and visitors to Liverpool was key to us extending this trial.”

Metro Mayor Steve Rotheram has announced that “The World Reimagined” is...