This phase of work has seen the existing linkspan bridges, which were over 130 years old and at the end of their operational life, removed and replaced and the landing stage undergo a major refurbishment, including upgrading the mooring bollards and installing new powered gangways. 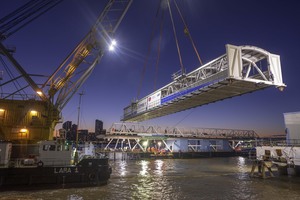 Carried out over a four-day period, the new north and south linkspan bridges and refurbished north and south boom were installed using a specialist Lara 1 Crane Ship after being transported up the river from Garston via a barge.

The works are part of a major investment to keep the services running at Seacombe for many years to come.

Once complete, they’ll mean the landing stage can operate for another 25 years before any major future maintenance is needed.

“The installation of these new linkspan bridges marks a major milestone in this significant investment at Seacombe Ferry Terminal by the Combined Authority.

“We’re hugely grateful to our loyal Mersey Ferries customers and their patience while these works are being carried out and look forward to welcoming them back to Seacombe in the new year.

“The Mersey Ferries are an important part of our cultural identity in the city region and these works will make sure that they continue to run from Seacombe for many years to come.”