Mayor of the Liverpool City Region Steve Rotheram has announced that Liverpool Baltic is the new name for the station to be built on the site of the former St James station after winning a public vote.

Voting was open for four weeks and there was a great response, with over 1,000 comments in the first 24 hours. The final results saw Liverpool Baltic the clear winner with 77.7% of the vote, with Liverpool Parliament Street in second on 15.2% and Liverpool Riverside third on 7.1%.

A decision was taken to change the station name to avoid any confusion with the existing James Street station in Liverpool city centre.

The shortlist was produced after initial discussions between the main partners on the scheme – Liverpool City Region Combined Authority, Network Rail, Merseyrail and Liverpool City Council.

The original St James station opened in 1874 and was named after the nearby parish church. It closed in 1917 as a cost-cutting measure during the First World War and was never re-opened.

Mayor Rotheram has pledged to build a station on the site, which will be located in Liverpool’s Baltic Triangle district, one of the fastest growing areas of the city – home to tech businesses and new residential developments as well as many popular bars, clubs and restaurants. 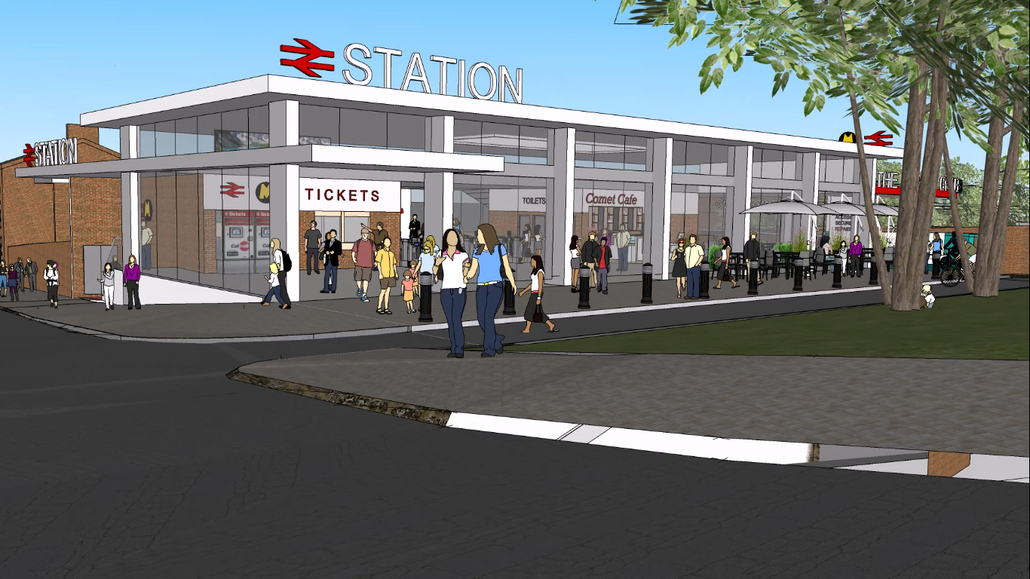 This is not the final design – it is to show what the general layout of the station will be. The fixtures and fittings and design of the ticket office frontage are likely to change.

Giving commuters and leisure visitors to the area a direct connection to the Merseyrail network would support the reduction of car journeys to the area, contributing towards reducing traffic congestion, as well as aspirations to improve air quality across the city region.

The station would be located between Liverpool Central and Brunswick Station on the Northern Line and will include passenger toilets, a cycle hub, step-free access to and between both platforms and a passenger drop-off area outside.

The scheme is currently in the design development stage. Land has already been purchased to safeguard the site of the new station ticket office building. The current plans aim for the station to be open in 2025, subject to funding being secured for the construction stage.

“The Baltic Triangle has undergone a true renaissance over the last few years, transforming itself from a forgotten industrial area into a vibrant, creative and thriving place to live, work and socialise. The station’s name is a testament to that success – and will unlock a host of new opportunities for the people and businesses based there, boost footfall, and improve connectivity to the rest of the city region.

“Liverpool Baltic is a great choice and reflects the modern character of the station’s home, which has become one of our region’s greatest transformation stories in recent years.

“This delivery of this project – alongside another new station at Headbolt Lane in Kirkby – is another manifesto commitment delivered. It marks the first steps towards Merseyrail for All, my vision for the expansion of the local rail network. It’s a massive part of my ambition to give our city region what London has had for years – a public transport system that is better-connected, more affordable, more reliable, and easier to use.”

“As a name Liverpool Baltic does what it says on the tin – and I’m glad because it will help further cement the Baltic Triangle’s identity throughout the city region. This new station will also further help drive the economic growth of this part of the city centre and act as a vital service for the long-standing residential community. Its development will also tie in nicely with the city council’s plans to improve the public realm in the area for both residents and visitors alike. The next few years should define the future of the Baltic Triangle for decades to come and it’s exciting to see this story unfold.”

“It’s fantastic to see that so many people from across the Liverpool City Region have had their say in naming this important new station which will be added to the Merseyrail network.

It’s fitting that this vibrant and forward-looking part of the City Region has a station name that reflects the transformation it has gone through in recent years.

“We are delighted to be involved in another exciting new Merseyrail station being proposed by the Metro Mayor and the Liverpool City Region Combined Authority to open up economic and environmental benefits for businesses, residents and visitors to Liverpool City Centre.

“With Liverpool Baltic being voted as the station’s name, we are now working with our partners to progress the design for this important new transport hub.”

Local jobs, tackling inequality and combatting the climate crisis at the heart...