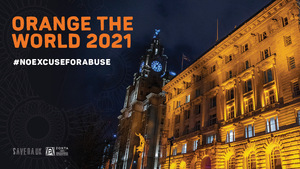 Some of the city region’s most iconic buildings and landmarks will be illuminated bright orange from this evening, to mark the event.

Liverpool City Region charity Savera UK, which tackles culturally-specific abuse such as ‘honour’-based abuse (HBA), forced marriage and female genital mutilation (FGM) has joined forces with Zonta Club London (part of Zonta International) to raise awareness of gender-based violence and abuse in the UK and around the world.

A series of events and initiatives will take place during the United Nation’s 16 Days of Activism, which runs from the International Day for the Elimination of Violence against Women and Girls today to Human Rights Day on 10th December.

“In this country there is an epidemic of violence against women, with men the main perpetrators. Two women a week are killed by their partners, one in four experience domestic abuse, and countless women feel unsafe simply walking down the street.

“The ‘Orange The World’ campaign is a vital way of raising awareness against the scourge of misogyny and abuse. The message from events and activities taking place over the next 16 days is clear: there is no room for gender-based violence in the Liverpool City Region.

“But, as a society, we have to do more than just raise awareness. Men, in particular, have to examine the role that we play. It is on us to hold ourselves, our friends and families to account and call out and report abuse. Working together, we can put an end to gender-based violence and build a brighter future for all our friends and neighbours.”

“The statistics about gender-based violence are shocking yet, sadly, no longer surprising. Across their lifetime, 1 in 3 women – around 736 million – will be subjected to physical or sexual violence by an intimate partner or sexual violence from a non-partner. This figure has remained largely unchanged over the last 10 years.

“It has never been more important for people to take action against gender-based violence. Activism takes many forms and even the smallest steps, such as educating yourself about different forms of abuse or identifying yourself as an ally can have an enormous impact. Our Orange the World toolkit provides a starting point for people to enact change.”

“We know there are women and girls – relatives, neighbours, friends and colleagues – who are suffering gender-based abuse and violence in our communities every single day.

“Today, and over the next 16 days, we want to make it clear that there is no excuse for abuse. This campaign is about demonstrating our shared commitment to eradicating violence against women and girls.  By lighting up some of Merseyside’s most iconic building in orange, we are sending out a visible message that are determined to create a brighter future for women and girls, free from violence and abuse.”

“I would urge any woman or girl who is experiencing abuse to please reach out for help. There are many fantastic organisations on hand to offer care and support across Merseyside, please visit www.victimcaremerseyside.org for more information.”