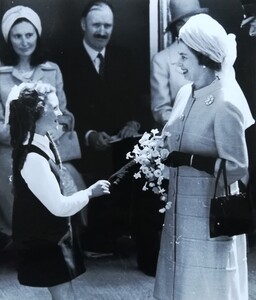 Tom Harker and his wife in the background as the Queen opens the tunnel in 1971.

The 90-year-old, who now lives in Shropshire, also told of his admiration for the engineers and workers who excavated the route in difficult conditions deep under the River Mersey.

Mr Harker was principal architect on the Kingsway project and was associated with the Mersey tunnels for around 25 years. His business partner was the architect Herbert Rowse who designed the Queensway Tunnel.

The decision to build a second road crossing between Wirral and Liverpool was taken following a dramatic increase in post-war traffic that left the Queensway Tunnel, opened in 1934, struggling to cope.

Consultants recommended a six-lane bridge which, according to Mr Harker, would have rivalled San Francisco’s Golden Gate Bridge.

But a tunnel – unlike the bridge – could be constructed in phases, helping to manage cost and the wider impacts.

Work started on Kingsway in 1966 with the construction of an 8ft high pilot tunnel through sandstone under the River Mersey.

Once complete, heavy machinery arrived from Pakistan in the form of the laser-guided Mersey Mole to excavate the main tube.

In this illuminating video, Mr Harker reveals the challenging conditions faced by workers and how the project came to a grinding halt when the Mersey Mole broke down mid-river – triggering a month-long mission to repair it.

Kingsway’s second tube was opened in 1974 – creating the four lane crossing that’s now used by around 45,000 vehicles a day.

The building of Kingsway Tunnel in pictures

Metro Mayor Steve Rotheram hails the courage of workers who built the Kingsway...
Scroll to top
Contact us
×
Media enquiries
×