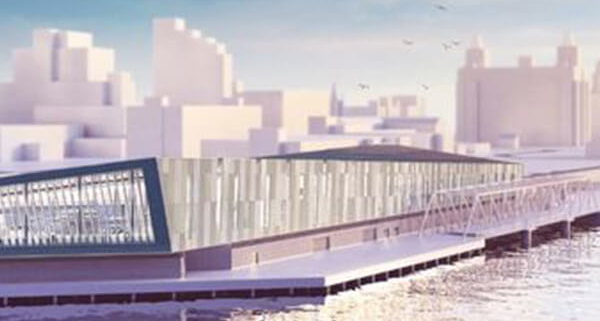 The Combined Authority has approved £20m funding for a new Liverpool cruise liner terminal. The £20m will contribute to the construction of a new terminal building to replace the current temporary terminal on Princes Dock.

Liverpool City Council is leading on the creation of the new cruise liner terminal, which will also include an adjoining hotel and multi-storey car park. The new facility will enable the world’s largest cruise ships to dock at Liverpool and is expected to directly create more than 500 new jobs. The current terminal generates more than £7m a year to the city’s economy.

Works will also involve improvements to the existing landing stage, including modification of existing buildings such as the lower cruise terminal reception building, relocation of the building on the northern end of the pontoon and creation of ancillary buildings for storage and use by operational staff; improvements to Princes Parade to incorporate pedestrian crossing facilities, provision of terminal parking, pickup and drop off facilities, and supporting development.

This year Liverpool will welcome more than 57 vessels, with 100,000 passengers and crew, but the city council wants to capitalise on the cruise boom by creating a state of the art passenger and baggage facility, complete with passport control, lounge, café, toilets, taxi rank and vehicle pick up point, to cater for Liverpool’s growing appeal in the cruise industry.

“The visitor economy is increasingly important to the whole of the Liverpool City Region – it grew by 66% between 2009 and 2017 and is now worth more than £4.5bn per year – and a new cruise liner terminal will help this vital sector continue to flourish.

“This is a unique project with the potential to boost the whole of the city region which is why as a Combined Authority we are pleased to be able to offer this substantial support to one of the city council’s flagship initiatives.”

“The new cruise liner terminal is vitally important and will mean that once again we can welcome the greatest cruise ships in the world to the Mersey.

“The construction of this new terminal will mark a new chapter in the city’s maritime future as we create a world class experience for the cruise companies and their passengers.

“We are working in partnership with the Combined Authority and some of the very best in the engineering industry to deliver this facility to the very highest standards.”

“The visitor economy has become one of the major drivers for economic development in our city region and ensuring that we have a state-of-the-art cruise liner facility will help to build on that success.

“As well as directly creating more than 500 jobs, we know that attracting more visitors, in bigger ships, will give a boost not just to businesses in the city centre, but around the city region, indirectly creating additional jobs for local people across the supply chain.”

END_OF_DOCUMENT_TOKEN_TO_BE_REPLACED

Joint statement from the Combined Authority, Merseyrail and the RMT
Scroll to top
Contact us
×
Media enquiries
×