Asylum seekers and refugees have been given a lesson in perhaps the most quintessentially English of sports by pensioners on the Wirral.

A group of around 30 students studying English as a second or other language, many from war-torn countries, were schooled in the art of crown green bowls at a unique event.

The course is part of an innovative new programme which puts experimentation at the heart of adult skills learning across the Liverpool City Region’s adult education curriculum. 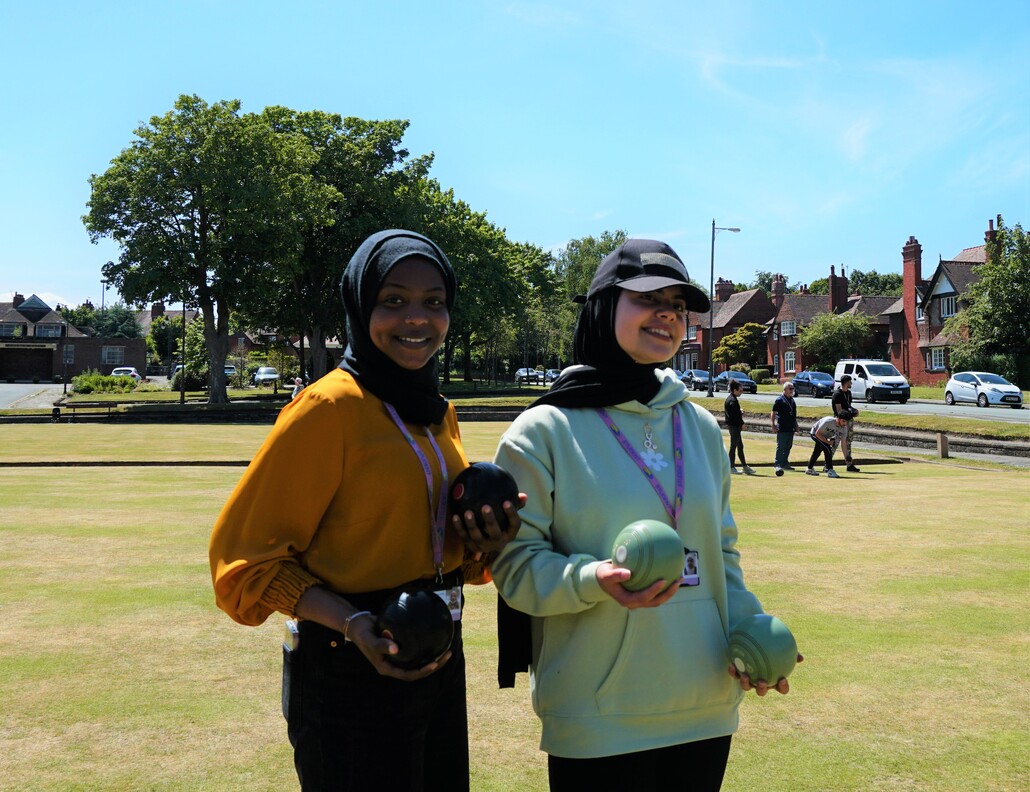 Using devolved powers over the adult education budget, he has set aside more than £6m in funding over three-years.

This week, under a fierce midday sun, students from Afghanistan, Sudan, Syria, Kurdistan, Eritrea and Iraq, took to the immaculately manicured greens at the historic Port Sunlight Village and Works Bowling Club.

There, under the tutelage of experts they learned the finer points of the genteel pastime, from thumb to finger peg.

The idea was to improve their English language skills in real-life situations but also to help them integrate into their new home and learn about life in Britain.

“Building a new life when you’re far away from home can be a real challenge, especially those seeking refuge from war, famine, or persecution. We want to help make that transition as easy as possible, helping people to settle in their new communities and get a sense of our culture.

“Because we have control over how adult education funding is spent locally, we’re able to pilot new and innovative ways of supporting people. This pilot is a perfect example of that. Rather than theoretical classroom learning, we’re easing new arrivals into their new homes helping them learn English by interacting with their friends and neighbours – and seeing much better, faster results!

“This is the devolution difference, empowering people to start afresh and build a better future for themselves and their families. Our region has been a sanctuary to people seeking refuge for centuries, a legacy we’re proud to continue today. Our message is clear: the Liverpool City Region is open to all. We will give you the support you need to help you – and our area – grow.” 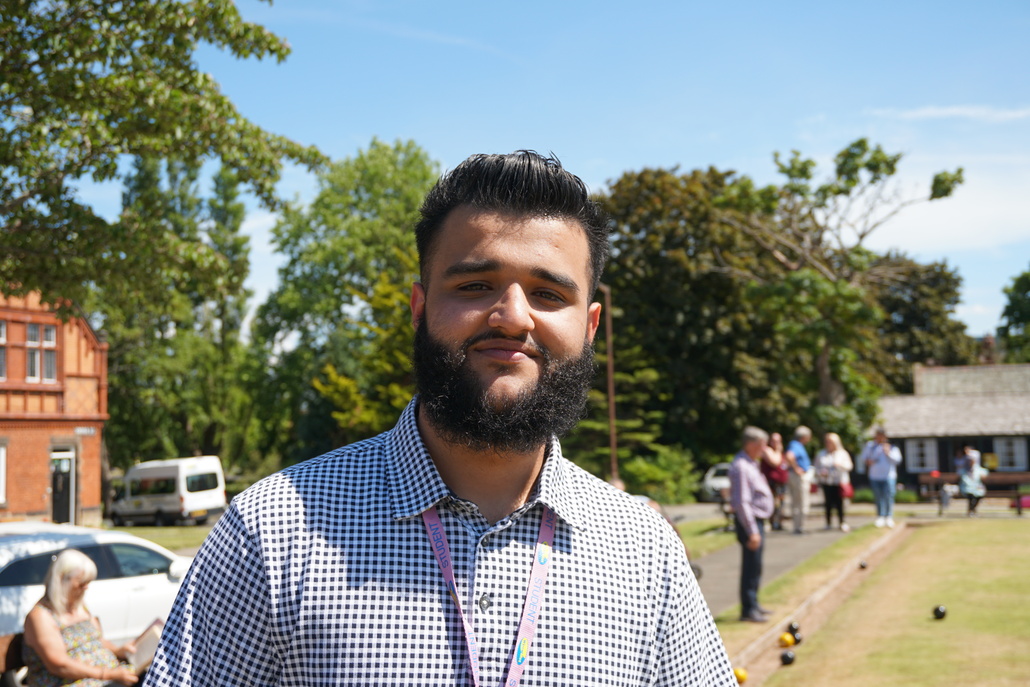 Rafiullah Enayet, (pictured), who came to Liverpool from Afghanistan in 2018 was quickly into the swing, celebrating an early success as his bowl rolled up close to the yellow jack.

The 22-year-old, based in Liverpool, who is currently on an IT course and plans to go to university, said he had played a similar game in his home country.

“On the first round I got close to the jack – closer than anybody else – that’s why I was celebrating,” he said.

“We used to play a game, kind of this game, in Afghanistan but they didn’t use bowls, they used sticks, but the rules… everything was the same.

“When the teacher was explaining to me it kind of reminded me of that game. This was first time I played this kind of game and it was really fun, I am going to tell my friends in Liverpool about it and we might go to play, maybe in Princes Park, near where I live.”

Waad Ibrahim, 20, who moved to Birkenhead from Sudan with four sisters and two brothers, said the session was really useful in introducing her to native speakers.

“The first time I didn’t get close but the second time, the third time – I did it,” she said.

“In my class there are people from lots of different countries, none of them British or from the UK, so this is really useful for me to speak to British people or those from the UK, to improve my English.” 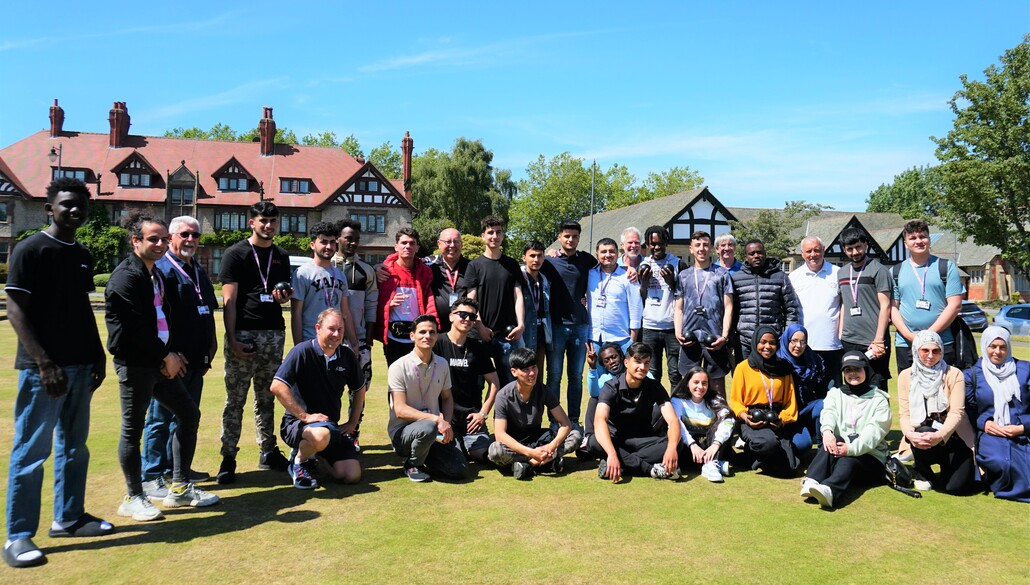 Mr Dow, a retired Merseyside police officer from Birkenhead, peppered his instructions with plenty of local linguistic flavour, jokingly telling one student to “take his bucket and spade” to retrieve a wayward bowl from the sand pit.

“I like to keep it light-hearted and throw in a bit of Scouse wit,” he added.

“But I personally think it’s great that they’re willing to come and partake in what is our heritage and learn about it and learn a great sport at the same time. It’s something that keeps them physically, mentally and socially active and would hopefully make them lots of new friends in this country.

“The group I took were very receptive, they listened and put it into practice. I have made it fun for them, I hope, and they have all asked to come back to learn the game properly. I had a chap from Morocco, a chap from a place in East Africa I can’t even pronounce and have never heard of before – a great lad – as well as people from Kurdistan and Iran.

“It enlightens me, listening to the tales of how they have had to escape their countries, and makes me realise how lucky we are in this country Hopefully, they will settle here – I am sure they will be an asset.”

Tutors at Wirral Met College took the opportunity to create “enrichment events” where learners were placed in real-life situations to help orientate them to the peninsula, including visits to libraries and vaccination centres.

From reconnecting with familiar native species at Knowsley Safari Park to conquering a fear of water among migrants who arrived on small boats, via trips on Mersey Ferries, the risk-taking approach has produced additional benefits.

The principal of Wirral Met, Sue Higginson, said: “Because adult skills funding is devolved in Liverpool City Region, we can do things that ordinarily, the funding wouldn’t cover.

“We are able to work with the city region to identify priorities and one of the things they have done is to make this Test and Learn facility available so that we can explore things that would not normally be funded.

“So, alongside these students learning English as another language – sometimes it is a second, third or even fourth language – they are also able to go out and explore the city region.

“This event is not just about bowls but also about learning the history and heritage of Port Sunlight, which is a beautiful destination, so it really brings all those things together.”

Following the devolution deal that saw the creation of the Metro Mayor role, the Liverpool City Region Combined Authority took over responsibility for the £55m yearly Adult Education Budget.

Test and Learn – part of the devolved Adult Education Budget – was created three years ago – to innovate with new ways of teaching and learning.

During the first year, a total of 31 pilot projects were funded, widening participation, in particular to include disadvantaged groups.

Almost 1,800 learners took part, and an independent evaluation concluded that the pilots on average cost less than for mainstream adult education per learner but generated much more in social value.

The Test and Learn scheme was initially aimed at tackling local “market failures” in English and maths but has since been rolled out to many other areas.

Projections, sound and even smells can be used to simulate a variety of real-life environments for students at Sefton Adult Community Learning Centre.

The flexible space can provide meditation and mindfulness classes accompanied by lapping waves or blazing sirens and flashing lights to simulate pressurised environments for paramedics.

Sci-Tech Daresbury first to sign up to LCR Connect for future proof connect...
Scroll to top
Contact us
×
Media enquiries
×