A new strategy focused on driving down the number road traffic collisions with a bold aspiration that no one will die or be seriously injured on the region’s roads by 2040 will be launched today.

The Liverpool City Region’s Road Safety strategy will be unveiled by the Merseyside Police Commissioner Emily Spurrell and Mayor Steve Rotheram to coincide with a major safety operation on The Strand in Liverpool city centre.

The strategy aims to reduce the number of those killed and seriously injured on Merseyside’s roads, working towards an overall Vision Zero target that aims to ensure that by 2040 there are no avoidable collisions on the region’s roads.

The plan is also focused on creating a safer environment for people to travel on foot and by bike and more children to walk or cycle to school, while also contributing to improved air quality across the region. 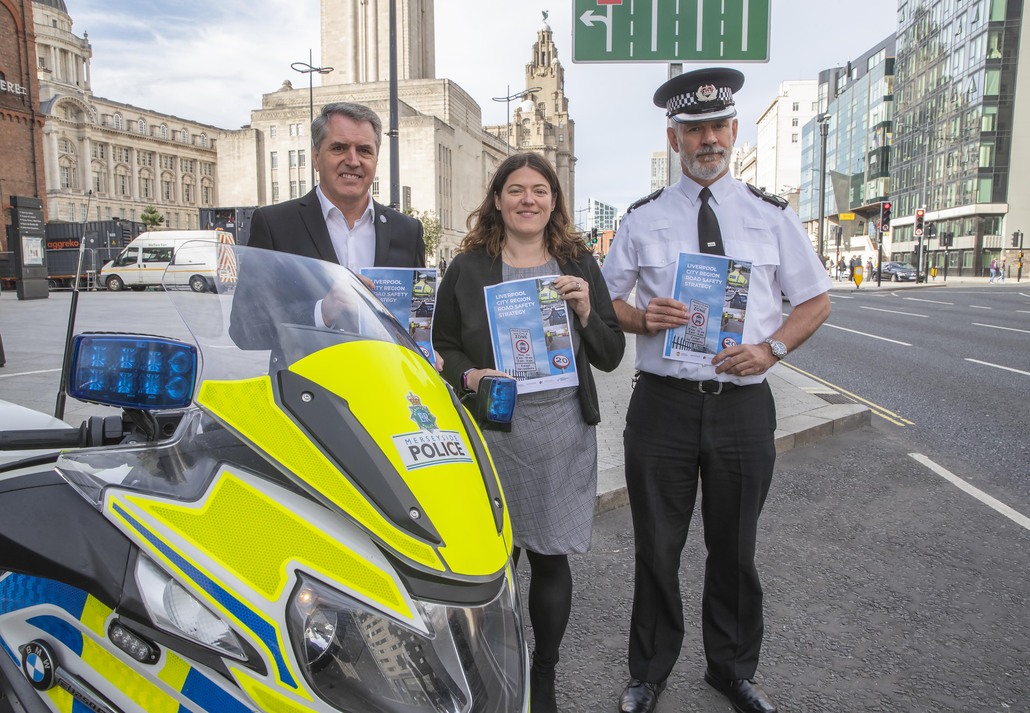 The strategy focuses on four key pillars – Safe Speeds, Safe Streets, Safe Vehicles, Safe Behaviour – and outlines the methods and measures which will be used to drive change. It will be used by the partners who make up the Merseyside Road Safety Partnership (RSP), including all five local authorities, Merseyside Police, Merseyside Fire and Rescue Service, North West Ambulance Service, Highways England, and the health sector. It has also been shared with the Cheshire Road Safety Partnership covering the Halton borough, who will be adopting a similar approach.

“Each and every death or serious injury on our roads is one too many. These road collisions devastate lives, families and communities.

“We are committed to ensuring everyone can travel throughout our region safely and this ambitious Plan sets out how as a partnership we want to reduce the number of fatalities and casualties in the years ahead, with the ultimate aim that there are no avoidable collisions on our roads.

“Deaths and injuries on our roads are neither acceptable nor inevitable – they are preventable and that is what we are focused on delivering.”

“I want our roads to be as safe as possible for people to get from A to B, regardless of their means of travel. Whether you’re driving, cycling, walking, wheeling, or scooting, everyone has the right to feel secure while travelling in our area.

“While a big part of that comes down to people’s road safety awareness, there are lots of practical steps we’re taking to encourage long-term behaviour change in how people choose to travel in our area.

“I’m working to build a public transport system that provides our residents with a genuine alternative to the car. We’ve invested in significant projects like our new publicly owned £500m trains and hydrogen buses, to make travelling by public transport easier than ever before. And we’ve allocated a further £42m in new and improved active travel infrastructure. By giving people a reason to leave the car at home for shorter journeys, we can drastically reduce traffic congestion on our roads – making it safer and easier for people to get to where they need to.

“It’s not only helping to protect our residents either – it’s for the good of our planet too. Every car we get off the road is a step towards our region’s target to reach net zero carbon by 2040. Working with partners across our region, I’m confident that we can make our region’s roads the safest, cleanest and greenest place to travel in the UK.”

“Merseyside Police is committed to improving the safety of our roads and reducing the numbers of people killed and seriously injured each year. Serious and fatal collisions have devastating effects for all of those involved.

“We carry out enforcement on our roads on a daily basis and we hope that this initiative raises awareness and encourages people to think about their actions and the devastating effect they can have on others.”

ACC White added: “Merseyside Police will not tolerate those drivers who present a danger to other more vulnerable road users such as children and the elderly. We will work alongside our partners to ensure that everyone can travel across Merseyside safely.”