• Bid to government for £667m to improve bus network

A bid to deliver ten projects that would revolutionise bus services across the Liverpool City Region has been announced by Metro Mayor Steve Rotheram.

The projects are detailed in the Combined Authority’s Bus Service Improvement Plan (BSIP), which has now been submitted to Government and is available to view online, with the region seeking a £667m to improve affordability and reliability on the bus network.

The Combined Authority were recently successful in their bid for £710m for major transport infrastructure projects in the city region including significant bus priority measures – announced just over a week ago. 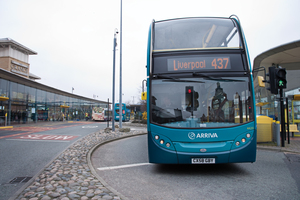 If secured, the new funding would represent the biggest ever investment in the region’s bus services from 2022, accelerating delivery of a wide range of transformative projects like priority bus lanes, reduced fares and new services.

This further bid would mean that more people could enjoy faster, more reliable services, that better connect the region, with tap-and-go contactless ticketing, while travelling on high-spec and more accessible zero emission buses.

Building on the existing Liverpool City Region Vision for Bus, the BSIP has been produced with input from residents via the Big Bus Debate consultation process, as well as with bus operators and local council leaders in response to the government’s National Bus Strategy.

With 82% of public transport journeys in the region taken by bus, investing in improved services is a vital part of Metro Mayor Steve Rotheram’s pledge to deliver a London-style integrated transport system for the Liverpool City Region.

“Hundreds of thousands of people across our city region rely on the bus every day, so we need to make sure we’re offering them the best possible service as well as encouraging more people to ditch the car and get on public transport. This new plan is a blueprint for how we will deliver a bus service fit for the future.

“Bringing in tap and go ticketing with capped fares, building new fast and efficient Green Bus Routes and buying more zero emission hydrogen double deckers are all part of our plans to make catching the bus easier, cheaper and more attractive for communities across the Liverpool City Region.

“Our ambitions are to deliver a public transport offer integrating bus, rail and active travel that is a quality alternative to the car which will reduce congestion, improve our air quality, and help tackle the climate emergency”.

The 10 projects earmarked for investment align with the ambitions of both the Metro Mayor’s Vision for Bus and the national Bus Back Better strategy:

Bus reform: Flexible funding to support set up costs for the region’s preferred option of Franchising or Enhanced Partnership which will be determined following a rigorous and statutory process.

Affordable fares: Cheaper fares across the board including multi operator daily, weekly and monthly tickets

Enhancing our bus network: Proposals include introducing new routes, increasing the number of buses on some existing routes and providing more services at weekends and in the evenings

Green Bus Routes: To give buses more priority on our busiest roads to speed up journeys and make them more reliable and attractive to passengers
Tap and go: Delivery of “tap-and go” contactless ticketing with daily and weekly fare-capping.

Integrating Halton: Fund improvements to services and infrastructure in Halton so that it can be fully integrated into the city region’s transport system

Passenger charter: Setting standards that passengers should expect to see on bus services, and what to do when these standards aren’t me

Metrobus: Accelerate the introduction of Metrobus branding across the bus network