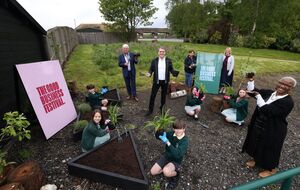 The kitchen garden will help young people from Knowsley and beyond learn about horticulture, food production and sustainability. The garden has been built with the support from the Incredible Edible Foundation who will be organising special workshops for local schools over the coming months.

It’s just one part of a new education initiative being delivered by the Good Business Festival – a three-day event across the city region from 7-9th July focusing on ethical, inclusive and purpose-driven business.

The education programme will include a set of special workshops for young people across the city region from partners including Abandon Normal Devices, Collective Encounters, Liverpool World Centre and the British Antarctic Survey amongst others. The programme will also be transformed into a digital resource which will be made available to schools and community groups across the Liverpool City Region and beyond.

In addition, the Good Business Festival are working with Knowsley Council to deliver a special youth summit this summer, taking inspiration from the COP26 United Nations climate change conference being held this autumn in Glasgow. The summit – hosted by TV presenter and conservationist Chris Packham – will bring together hundreds young people from across the Liverpool City Region to take part in a schedule of talks and activities exploring how business impacts climate, the environment and animal habitats.

Taking full advantage of the surroundings of Knowsley Safari, the Youth Summit includes a line-up of special activities and interactive sessions from conservation tours to animal-themed aerobics.

“It’s fantastic to be at Knowsley Safari to launch the Good Business Festival’s youth programme.

“Over the coming months young people from across the Liverpool City Region are going to enjoy some really exciting and interesting activities as part of the Good Business Festival, but they’re also going be able to make their voices heard on the issues that they’ve told us are most important to them – the environment, natural habitats and food sustainability.

“I commissioned the Good Business Festival because I wanted to showcase the Liverpool City Region as a radical leader in championing ethical, value-driven business and we’ve launched the youth programme to ensure that our young people have a real say in the future we’re trying to build.

“In the Liverpool City Region we’re committed to building the fairest, greenest, and most inclusive economy in the UK and that means listening to future generations and providing them with the best opportunities we can.”

“I am really delighted that the Good Business Festival Youth Programme is being launched here in Knowsley and that our young people will have an opportunity to be involved in something so exciting. The summit later in the year will be a great chance to meaningfully involve and engage with the next generation and that is so important. After all, they will be the workforce and business leaders of the future.”

“When it comes to conservation and sustainability, young people are really showing us the way. That’s why it’s so important we give them the tools and knowledge they need to build a better world for the future. So I’ve been really proud that we’ve been able to work with our partners at the Incredible Edible Foundation to create this fantastic kitchen garden and that we are able to offer Knowsley Safari as the location for the Good Business Festival Youth Summit later this summer.”

The Good Business Festival, not-for-profit three-day event will take place Wednesday 7 July to Friday 9 July at venues across the Liverpool City Region, aiming to tackle the world’s greatest challenges by bringing together the smartest minds to think big, galvanise our ambitions and focus on progress and not perfection. Tickets to the main festival start at only £10 donation for a one day pass as the festival are using this as an opportunity for positive impact, all ticket proceeds are going directly to LCR Cares – a local community fund established in response to Covid-19 to support those needing help as a result of the pandemic in Liverpool City Region. https://thegoodbusinessfestival.com/tickets

The Good Business Festival, with more than 70 sessions in six boroughs across ten venues with leading business experts and creative minds, will explore the economic, environmental, consumer and technological challenges our society faces, as well as offering ideas, inspiration and practical solutions.

“The Good Business Festival’s goal is to collaborate with people of all ages and all businesses to tackle the big challenges that our society faces, from creating sustainable food to better housing, and examining how business can become a force for positive change.  Tickets are now on sale from only £10 and all proceeds go to local Liverpool City Region charities. We’d all be daft not to be a part of it!”

Two short journeys a week by bike or on foot could slash carbon emissions in...
Scroll to top
Contact us