Steve Rotheram, Metro Mayor of the Liverpool City Region, has announced plans to ensure a discharge-free River Mersey by the end of the decade.

“We have made enormous strides since the 1980s when Lord Heseltine rightly described the state of the River Mersey as ‘an affront to the standards a civilised society should demand of its environment.’

“The river today is an environmental success story but, as recent public anger over the discharge of untreated sewage into our rivers and seas shows, we cannot be complacent and must do all that we can to ensure we care for our great river.

“To that end, I want to use the powers enshrined in our devolution deal to eliminate discharges of untreated waste into the River Mersey by the end of the decade.” 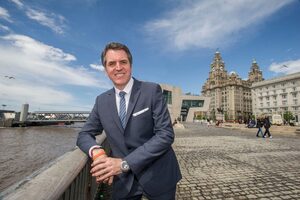 To start the campaign, Mayor Rotheram will advise businesses and organisations that currently discharge waste into the River Mersey of the plans, inform them of progress made to date, and explain the importance of eliminating untreated discharges by 2030.

The Metro Mayor will also advise businesses of his intention to ensure the Liverpool City Region Combined Authority does not invest in projects that do not act to prevent untreated sewage discharging into the rivers.

The Liverpool City Region’s original devolution deal, signed with central government in 2015, recognises that: “The River Mersey has undergone the greatest clean-up of any river in Europe over the last thirty years. Through the commitment of local stakeholders, the transformation in environmental performance has been internationally recognised and this means the river is once again a great asset for tourism and trade.”

The devolution agreement commits the Liverpool City Region to “commit to the cleanest river standard by 2030 and commit to a discharge free Mersey by 2040.” The Metro Mayor’s announcement will bring that commitment forward by a decade.

The plan is backed by Lord Heseltine who, as Environment Minister in the 1980s, was a driving force behind establishing the Mersey Basin Campaign Partnership, which was instrumental in bringing together public and private sector organisations to carry out the original clean up.

“In 1981 I looked out of my hotel window one night.  There was this mighty river which had played so critical a role in our history, and we had turned it into an open sewer. I had a vision. Let us restore its quality and environment. Let us bring back life and pride. The clean the Mersey campaign was born and much progress followed. After 25 years the momentum faltered. Today’s announcement is that vision reborn.

“I congratulate Steve Rotheram and all who played a part in this decision. I believe that we should see this as a world class initiative.  Clean water is going to be one of the great challenges of the decades ahead the Liverpool City Region can put itself at the front of the race to show people across the world how it can be done.”

“The Mersey is an iconic river, central to the history of the North West and the UK. The health of the river is inextricably linked to the health of our communities, and so we must find more modern solutions for the management of sewage rather than rely on this archaic method. It is essential we do everything we can to protect and manage our rivers and water resources to ensure they enhance the area and benefit our residents and local wildlife and ending untreated waste discharges by the end of the decade is a vital step in the right direction.”