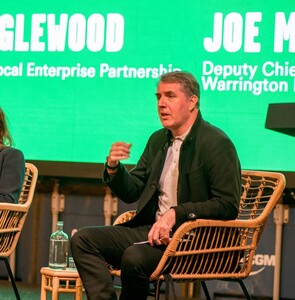 Steve Rotheram has said that the North West and UK must secure a green legacy from COP26 to give hope to future generations.

The Metro Mayor of Liverpool City Region says that a decade of action and investment must follow the international climate conference to deliver social, economic and environmental wins for our communities in the short term.

He addressed the crowd at an official COP26 North West event in Manchester this morning (9 Nov), before heading north by train to represent the region on the global stage at Glasgow.

He joined regional leaders including Mayor of Greater Manchester Andy Burnham, members of youth parliament and climate activists for a landmark discussion in the Glasgow green zone. The session – ‘Talking About My Generation’ – tackled the issue of translating climate talk to action to ensure the North West becomes the first net zero region by 2040.

“COP26 is an internationally important event, a rare chance where the eyes of the world will be on the UK. We have a responsibility to lead international efforts to cut our carbon emissions, rapidly decarbonise and, ultimately, to save our planet. I believe that the North West will be the (clean) engine that drives that national effort, and that my region should be at the heart of that.

“I want the Liverpool City Region to be at the forefront of the green industrial revolution, leading the charge towards net zero, and taking advantage of the myriad of jobs, investment and opportunities that it will provide. From our existing strengths in wind and solar power, to revolutionary new projects like HyNet and our Mersey Tidal Power scheme, our region has the potential to be Britain’s Renewable Energy Coast – with local people benefiting from the employment and training opportunities that go with it.

“We have heard loud and clear from young people that the time for talk is over.  In the Liverpool City Region we are already taking action to tackle the climate emergency and we will untiringly continue to do all in our power.  We owe it to our young people’s futures.”

Major green projects in the Liverpool City Region continue to be profiled during COP26, as part of the Metro Mayor’s mission to double the number of green jobs in the City Region and unlock investment to become net zero at least ten years ahead of the national target.

Events both in the North West and in Glasgow have showcased the progress made on initiatives such as retrofitting homes and supporting grassroots projects through the Community Environment Fund. The region has also been profiling major energy projects and investment opportunities such as Mersey Tidal Power – harnessing renewable power from the Mersey – and HyNet, a pioneering project to replace methane with hydrogen to supply’s the region’s grid and energy intensive industries by 2035.

It’s all part of a drive for the City Region to play a leading role in the international push towards achieving zero carbon, with natural assets and skills in renewable energy putting the North West in a prime position to deliver a Green Industrial Revolution.

On Thursday 11 November 2021, the Metro Mayor will join North West leaders for panel session to be streamed live from Glasgow online. Tune in to watch ‘Generation Green’ from 6.55pm by clicking here.