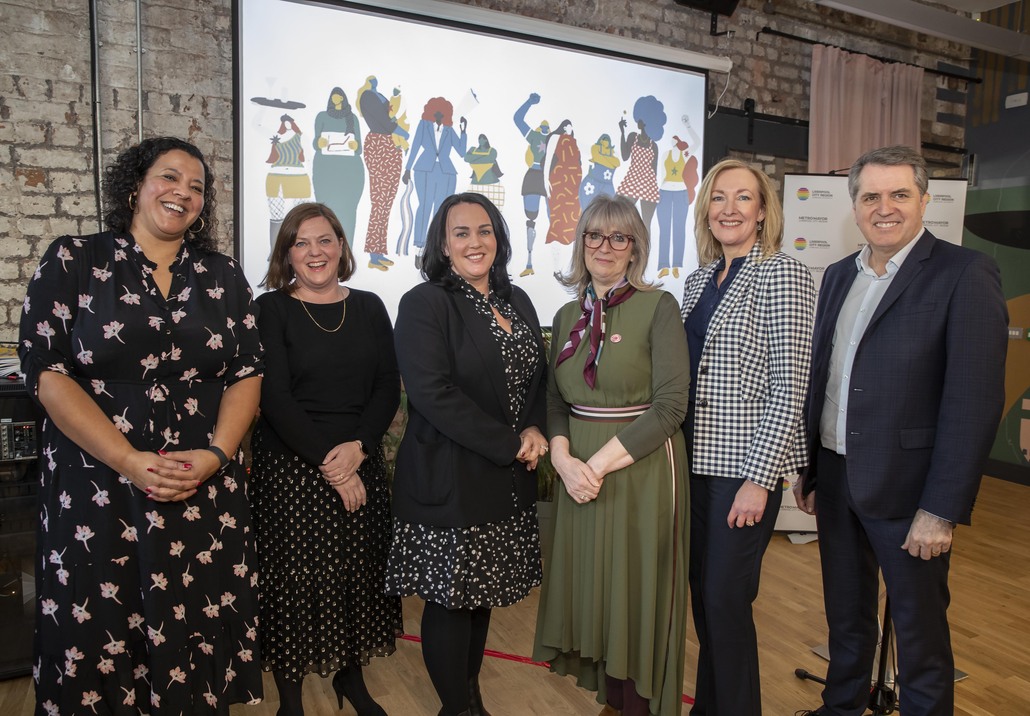 The commitment came at an International Women’s Day event that saw the launch of a new report from the ‘One Day’ civic group, which aims to increase the visibility of women who work in the region by lobbying the Liverpool City Region Combined Authority and other public bodies to advocate for change.

The ‘One Day Today’ report sets out some of the stark facts, revealing that average annual pay is more than £8,000 higher for men than women. While 8,100 men are unable to work because they are looking after a family or home, for women this number more than trebles, at over 30,000.

It also sets out ten key objectives, which include more women in leadership, supporting more women-led projects and investment in industries proven to drive economic growth such as care, hospitality, and culture – and deliver wellbeing at the same time.

At the event, the Combined Authority also published its detailed response to the report, aimed at addressing those areas within the power of the regional authority. Commitments included achieving more gender balance in the Combined Authority’s workforce, working with partners to co-develop projects that address inequality, and implementing new frameworks that result in more inclusive investment approaches.

‘Narrowing’ the gender gap between women and men could add an additional £230 million every year to Liverpool City Region’s economy, according to analysis by ‘big four’ accounting firm, Deloitte.

“This International Women’s Day, I commend the work of the One Day group who have brought forward this important report and am very pleased to see the collaboration between One Day and the Combined Authority on how we take it forward.

Today must mark a renewed commitment and focus on addressing gender equality and the response of the authority will help us make further progress on this vital issue.

That is why today I am also asking the Combined Authority to establish a Gender Equality Panel for the city region, which would raise the profile of this issue even further and allow us to take more coordinated, collaborative action to address gender inequality in our region.”

“A collaboration between LJMU and over 100 women, this report gives a voice to women in the region – and highlights unpaid care, unaffordable childcare, social care and the gender pay gap that inhibits our economic potential. Every employer in the region has a responsibility to address this.

Its really important to take the time to develop relationships between activists, researchers and policy makers and we are hoping that stronger relationship emerging between everyone to tackled the inequalities women face everyday.”

“This International Women’s Day, it is vital to recognise the often-overlooked contributions of women to our economy and society. Women make up more than half of our region’s population, yet disproportionately work in its lowest paid and most insecure industries.

In a region like ours, where fairness and social justice are ingrained in us from an early age, that just isn’t right. I ran for Mayor to make the Liverpool City Region the fairest, most inclusive and equitable place possible. That has to start with tackling the inequalities women face every day in their work and social lives.

As a white man, I know that I don’t have all the answers, but I want to listen and engage with those that do. Collectively we are much stronger than we are alone. And together – we will build a region with no one left behind.”

About the One Day Today report

The One Day Today report is a pilot project led by One Day and funded by Liverpool John Moores University (LJMU) as part of Research England’s Strategic Priorities fund. Its purpose is to build on the voluntary actions and activity sparked by One Day and formalise and deepen partnerships and collaborative opportunities. It highlights the importance and need for more evidence-based research and data broken down by gender and race, which can better support policy making at a local level to be more effective. LJMU is committed to continuing this partnership and research support.

Key facts revealed by the One Day report include:

Safer streets for women in Liverpool