A life size mock-up carriage of one of the new trains for the Liverpool City Region has taken on a new role this week at a college teaching rail engineers of the future. 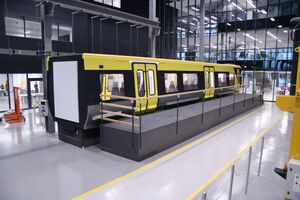 The full-scale mock-up of one of the new Class 777 units was built as part of the design process and was also used to show residents of the Liverpool City Region how the trains and their state-of-the-art features would work.

Liverpool City Region Combined Authority has now transferred the mock-up carriage to the National College for Advanced Transport & Infrastructure (NCATI) in Doncaster, Yorkshire where it will be displayed used as a learning aid and design tool by students.

The carriage will be used by the students for many tasks which will include rolling stock specification writing, design and driver’s cab ergonomics.

The detailed model is fully interactive, with working doors as well as an automatic sliding step – the revolutionary technology which will allow level boarding for all passengers across the Merseyrail network.

A group of local rail users, who directly influenced the design features of the new trains through a passenger research exercise, made excellent use of the mock-up carriage while more than 10,000 people also came to see it when it went on public display in summer 2018.

“The new trains for the Liverpool City Region represent are going to be the most advanced in the country with state-of-the-art features that will make using our rail network more attractive and accessible. Importantly they were designed with the input of local people to meet their needs.

“In that spirit of collaboration, we’re delighted to be able to transfer ownership of this full-size, mock-up to the National College for Advanced Transport & Infrastructure. Hopefully it will prove to be not only a valuable educational tool but also an inspiration to the next generation of rail engineers.”

“The recent arrival of the Class 777 mock-up at our Doncaster campus will be a great addition to our workshop.

“Our level 4 Cert HE & level 5 Foundation Degree students were involved in the build which has recently been completed.

“It has given the students a chance to look at the design and layout of the carriages and explore how these affects capacities, including disabled areas, areas for cycles and larger standing areas that are needed for urban Metro rail lines.

“With the mock-up having fully operating doors and situated against a platform they can see how access can be designed to make this easy for wheelchair using passengers.

“The mock-up will become a great asset for the students to use to enhance their studies.”

“The addition of the 777 unit to the workshop here in Doncaster is fantastic. It’s a really useful learning aid for our modules that have a focus on passenger-facing operations.

“Being such a modern example, it gives us an opportunity to look first-hand at how industry is adapting to modern-day considerations such as accessibility and passenger comfort.

“It is also a very visible training aid for those of us who benefit from a more hands-on approach to learning. And pushing buttons is fun!”