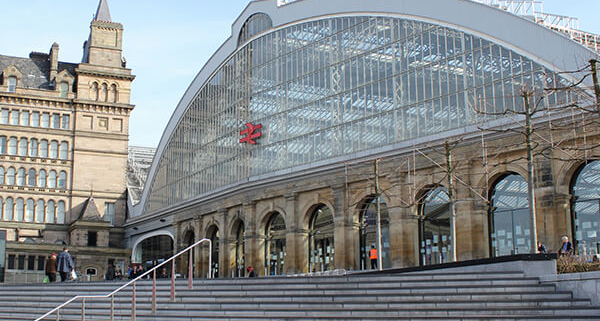 Work will take place at the station between 30 September and 22 October in what is the biggest upgrade the station has seen since the 19th century.

The project is one of 10 major railway upgrades as part of a £340m railway investment in the Liverpool City Region, and sits within the wider Great North Rail Project to transform rail travel for customers in the North of England.

Once complete in 2018, the work will enable an extra three services per hour in and out of Lime Street station, including new direct services to Scotland. Longer, better managed platforms will allow bigger trains, with more space for passengers, in and out of the station.

The plan is to keep people on trains wherever possible, including diverting many main line rail services to Liverpool South Parkway and getting people to and from the city on the Merseyrail network. Where rail replacement buses are required they will be high quality and will offer both express/limited stop and stopping services.

For the first nine days of the closure, engineers will also be working to complete the installation of the fourth track between Huyton and Roby. This will allow faster no-stop intercity services to overtake local stopping services along this route.

“With passenger figures set to double during peak periods by 2043, the Liverpool Lime Street upgrade is vital to transform train travel for passengers in the future. Our work will enable faster, more frequent and reliable train services to run in and out of the station by 2019. We’ve worked closely with our colleagues across the transport industry, and the Liverpool City Region, over the past two years to build a robust plan to keep passengers on the move during our Lime Street upgrade.”

“The Liverpool City Region is ambitious in its transport and infrastructure plans as they’re key to fully reaching our economic potential. We have to accept that any significant improvements, like this work to Lime Street station, will bring disruption but it’s about ensuring it’s well planned and managed to keep people travelling for work, business or leisure.”

“I welcome this scheme as an important stepping stone in improving the City Region’s capacity and connectivity. As the Lime Street upgrade gets underway we’ll be continuing to make the case for the north to get the infrastructure commitment and funding it deserves, not least full high-speed rail connections west-east, joining up north-south HS2 infrastructure with Northern Powerhouse Rail into Liverpool.”

“The train companies that serve Liverpool Lime Street have developed a joint plan that will allow customers to move in and out of the city during these crucial works.

“There will be significant changes to the usual timetable so those heading to or from Liverpool should plan their journeys accordingly and allow extra time to travel.

“Information and advice can be found on each of the operators’ websites and at nationalrail.co.uk.

“Going forward, this important upgrade will allow TransPennine Express to run longer trains with more carriages into the station meaning more seats for customers. It will also enable us to introduce a brand new direct service from Liverpool to Glasgow in December 2018.”

“We have been clear from the outset that the City Region must remain open for business during the Lime Street upgrade works. The plans to keep people travelling, whatever their reason, have been developed over many months involving not only Network Rail and the train operators but the Liverpool City Region too, ensuring that visitor economy and businesses have had their concerns addressed and have had opportunity to shape the plans.

“A lot has been learned from the track renewal work which saw disruption to Merseyrail’s Wirral line for six months and from the unexpected wall collapse on the approach to Lime Street station earlier this year and we all aim to use this knowledge to make the experience for travellers as positive as it can be.”

“An enhanced Lime Street station with more capacity for more trains will mean an even greater number of rail passengers in the future can use Lime Street high level, and connect with local trains on the Merseyrail network down the escalators at Lime Street low level.

The Merseyrail network provides fast, frequent and reliable travel around the city region, complementing the longer distance rail services available from Lime Street, and promoting economic benefits to the city through business, commuter and leisure travel.

‘During the temporary closure of Lime Street station, we will operate a 15-minute service between Liverpool South Parkway and the centre of Liverpool at Moorfields, using full length trains to maximise capacity.

Changing from train to train at our modern and spacious station at Liverpool South Parkway is quick and easy. The South Parkway connection will enable us to play a supportive role in helping to maintain ‘business as usual’ in the city.”

Over the 23 days, engineers will be remodelling station platforms, increasing them in number and in length. Work will also take place to install overhead line equipment to power electric trains and upgrade track.

This is the first of two phases of work at Liverpool Lime Street, with a further station closure planned in summer 2018. Key travel details are below, but to find out more visit Find out more: www.networkrail.co.uk/lcr

Tickets will be valid on the Merseyrail network during the work so there is no need to purchase a separate ticket.

It is estimated that transferring onto the Merseyrail network should add only 10-15 minutes to your journey. There will be 4 trains per hour, Monday to Saturday, and 2-4 trains per hour on Sundays (depending on the time of travel).

The express rail replacement bus service will run every 15 minutes, Monday to Saturday, and every 30 minutes on Sunday. This will add, approximately, up to 18 minutes onto journeys (based on peak-time travel).

Stopping rail replacement bus services between Hunts Cross and Liverpool Lime Street will run every 30 minutes, Monday to Saturday, and every hour on Sunday. This will add, approximately, up to 22 minutes onto journeys.

Between 30 September and 8 October, services between Manchester Victoria, Wigan, the Lakes, Scotland, Blackpool and Preston will start/terminate at St Helens Central or St Helens Junction. Quality rail replacement bus services will offer an express/limited stop service and a stopping service calling at all stations on both routes.

On the final two days, 21 – 22 October, services will start/terminate at Huyton station with quality rail replacement bus services on hand to get you to/from Liverpool Lime Street. On Saturday they will run every 15 minutes and on Sunday every 30 minutes.

Weekend work on the Ordsall Chord in Greater Manchester from now until 23 October will also mean there will be some changes to services in and out of Manchester Victoria. Passengers are advised to check www.nationalrail.co.uk  before they travel.

For more information on the schemes that make up the £340m rail investment in the Liverpool City Region by the end of 2019 visit  www.keepliverpoolmoving.com