The Mayors of the Liverpool City Region and Greater Manchester will visit Ireland later this month as part of a joint mission aimed at strengthening trade and cooperation between the North West and Ireland.

From 28-29 March, Steve Rotheram and Andy Burnham will be in Dublin for a series of meetings and events with political leaders, trade officials, and businesses from Britain and Ireland. 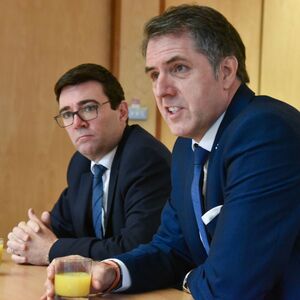 The Mayors will hold meetings with Tánaiste Leo Varadkar, Irish Foreign Minister Simon Coveney and Enterprise Ireland CEO Leo Clancy, and take part in a roundtable with the British Irish Chamber of Commerce.

As part of the joint mission, the Liverpool City Region, Greater Manchester, the Irish Ministry of Foreign Affairs and the DIT will commit to further efforts to deepen cooperation between Ireland and the North West. This is set to include regular visits each year, collaborating on shared priority areas including climate action, developing trade links, and building on sporting and cultural links.

Exports of goods to Ireland from the North West amounted to almost £2bn in 2019, with the Liverpool City Region and Greater Manchester accounting for around half of this total. The visitor economy in both city-regions is worth around £10bn, with Irish visitors among the most frequent, while Ireland is one of the North West’s biggest tourism destinations.

“The Liverpool City Region has always been an open and outward-facing place and we have no closer friend than our ally over the water. Ireland has a special place in the hearts of many of the 1.6m people who call our region home, so much so that we’re often referred to as Ireland’s 33rd county!

“I’m really excited by this historic trade delegation that Andy and I are leading to help the North West to forge a stronger, more prosperous future for people on both sides of the Irish Sea. We not only have a rich and intertwined past, but a shared set of future priorities too. On renewable energy, trade, investment, culture, innovation and much, much more I’m looking forward to working with colleagues to help our region grow.

“Ireland is a really important trading partner for our area. More than 600 local businesses export over £300m of goods, with a further 400 importing too. It’s a fantastic foundation, but I want us to do better. I hope that this delegation marks another important chapter in our relationship with Ireland.”

“I am so pleased that Mayor Steve Rotheram and I will be leading this joint mission to Ireland and Northern Ireland later this month.

“The ties that bind the island of Ireland and the North West are deeply embedded in our communities and our places. This visit will be all about taking that relationship forward, and looking at those shared priority areas – like climate action, digital innovation, and culture and sport – where we can work more closely together for the benefit of our people and our economies.

“Greater Manchester is a global city-region, and we recognise that many of the challenges that we face are global in scale. We have always sought to cooperate with our friends and partners around the world, and as the UK enters into new trading relationships we are determined to put the North West on the front foot to take advantage of those opportunities.”

“I’m delighted to welcome the Minister and the Mayors to Ireland. There are strong links between the North West of England and this country, which the Embassy wants to help bolster, including as part of the Government’s Levelling Up agenda and our commitment to developing the trade and wider relationship with Ireland, a crucial partner for all of the UK.”

Ambassador Adrian O’Neill, Ambassador of Ireland to the UK, said:

“I am delighted that this visit by the Mayor of Greater Manchester Andy Burnham and the Mayor of the Liverpool City Region Steve Rotherham to Dublin will take place later this month. The visit presents an excellent opportunity to celebrate the longstanding ties of people, trade and friendship between Ireland and the North-West of England and to broaden and deepen our existing connections. We are very proud to have opened a new Irish Consulate General for the North of England last year and welcome the enhanced links that are already flowing from the on the ground presence of our Consul General Sarah Mangan and her team.”

Sarah Mangan, Consul General of Ireland for the North of England, said:

“I am delighted to be accompanying Mayor Rotheram and Mayor Burnham on their visit to Ireland. Their extensive programme, covering so many sectors, and with a number of high-level meetings, is a reflection of the depth of cooperation that currently exists between Ireland and the North West of England, as well as of the opportunities that the Consulate General hopes to build on in the future.”

The mission will be followed by a visit to Northern Ireland on March 30, where the Mayors will meet with the Lord Mayor of Belfast and take part in events focused on joint working in priority areas like net zero action, energy, transport, and skills.

Greater Manchester has invited Belfast to attend a Decarbonisation Summit in the city-region in June, at which the Liverpool City Region will also be represented.