Halton residents will soon have the choice to ditch the car for shorter journeys after plans to build a new walking and cycling route in the area were given the green light by the Liverpool City Region Combined Authority.

Developed in consultation with local people, the 9km route will provide a new green travel link to the Sci-Tech Daresbury innovation campus – one of the fastest-growing sites of high-skill employment in the Liverpool City Region and home to major international firms including IBM and Unilever.

The £5.9m scheme – funded by the Liverpool City Region Combined Authority, delivered in partnership with Halton Borough Council – will see the creation of new safe, segregated cycle lanes and traffic free roads and link some existing off-road cycle paths to make a continuous 9km route from Bridge Street in Runcorn right though to Daresbury. 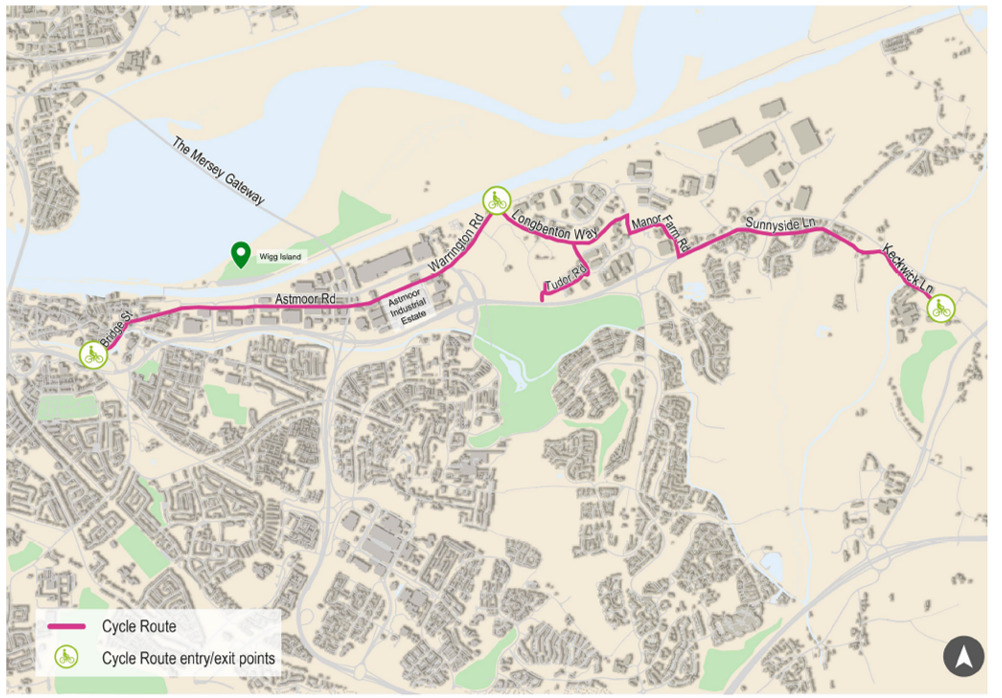 The investment will include the construction of new crossings and upgraded junctions, as well as the installation of more than 50 columns of LED street lighting. Work on the project could begin as early as August of this year.

Twinned with the opening of the Silver Jubilee Bridge separated cycleway in 2021, once completed the route will enable people to take cycle journeys on dedicated active travel routes from Widnes to Daresbury for the first time.

“Being a member of the Liverpool City Region means that Halton can benefit from region-wide investment. We’re targeting investment directly into projects like this that might not otherwise have been possible.

“For too long, too many of our communities have been forced to put up with a fragmented, under-funded system that doesn’t offer them a genuine alternative to the car. Thanks to devolution – we’re putting that right.

“I want to make it easier than ever for people to make better choices on how they travel for shorter journeys so that, wherever possible, they have the ability to leave the car at home and walk or cycle instead. The benefits are crystal clear – not only for people’s health and bank balance – but for the health of our planet too. The more we can reduce pollution and congestion, the more we can do out bit for the future of our world – and the faster we can reach our target to be net zero by 2040 at the latest.”

As well as linking to new housing developments, the scheme will also be fully integrated with Runcorn Station Quarter, an ambitious sustainable transport project delivering improved access to the Key West Coast Mainline station as well as the nearby Bridgewater Canal and Runcorn Old Town centre.

“This is an important route within Halton, identified through the Local Cycling and Walking Infrastructure Plan, linking areas of significant employment to the town centre, the mainline station and the wider area, opening up opportunities for access to skilled jobs by low carbon, active modes of transport.

“It will also complement other active travel schemes in the area such as the recently completed Silver Jubilee Bridge, Runcorn Station Quarter and Halton Lea Busway routes.”

Liverpool City Region Walking and Cycling Commissioner Simon O’Brien said: “It’s fantastic that this scheme has been agreed and that we’ll able to push forward with our plans to help more people in the city region travel by bike or foot safely and with confidence.

“We have an amazing opportunity to help change the way we think about travelling around our local area, including to and from work to the shops and around our town centres.

“This new scheme will encourage people to get out of their cars, which will help improve their health and wellbeing, the local environment and even save them some money – it’s exactly what we need.”