Deputy Metro Mayor Cllr Janette Williamson has delivered a speech honouring Liverpool FC manager Jurgen Klopp, as he was presented with the inaugural German-British #Freundship Award, at an event celebrating the 75th anniversary of the establishment of North Rhine-Westphalia. 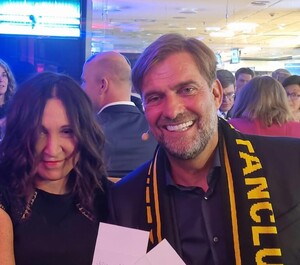 The award was created by the British Chamber of Commerce in Germany and the British Embassy, and celebrates the special relationship and friendship between the two countries.

Klopp is the first recipient of the award, which he received in a special ceremony at Signal Iduna Park, the home of his former club Dortmund.

Speaking at the event on behalf of Metro Mayor Steve Rotheram, Deputy Metro Mayor Williamson celebrated Klopp’s role as a link between the UK and Germany, and, having declared her own position as an Everton fan, said:

“Adored by Liverpool fans, Klopp is respected and (begrudgingly) admired by fans of my club as well.  He is a man of honesty, integrity, and decency whose compassion and care for others shines through in everything he does.

“And when he sings You’ll Never Walk Alone at Anfield – in concert with 54,000 other Liverpool fans – you know he means it.

“Ours is a proud community – one that sticks together through good times and bad – with a deep sense of solidarity – and in Jurgen we have found one of our own.

“His warmth, passion, and sense of humour is something that we as Scousers recognise – and see in ourselves. That’s why so many have taken Jürgen to heart.

“I’d like to take this opportunity to thank Jurgen for everything he has done for our city and our city region.”

The awards ceremony was part of a broader mission, involving other regional leaders, to cement and deepen economic and cultural links between the Liverpool City Region and North-Rhine Westphalia, Germany’s largest metropolitan region, which includes the cities of Dortmund, Dusseldorf and Cologne.

The Liverpool City Region has historical trading links with Germany, reaching back centuries.  In more recent years, links have been made through twinning initiatives.  Liverpool is twinned with Cologne, Knowsley with Stadt Moers, St Helens with Stuttgart and Halton with Marzahn-Hellersdorf in Berlin.