Young children in Toxteth have been busy beekeeping in a special project to teach the importance of the insects to our survival.

Under the watchful eye of local ‘bee whisperer’ Barry Chang, dozens of children, aged between 6 and 11 years old, have donned beekeeping suits over the summer to tend to the hives and extract honey. 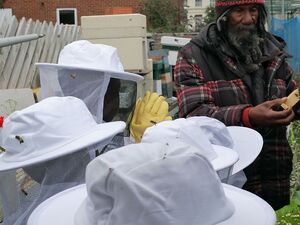 Twenty-four hives, each with thousands of bees, are split between two sites at the Caribbean Centre and on the roof of nearby John Archer Hall.

The project aims to bring beekeeping to people unable to afford the cost of keeping hives – while educating communities about the importance of bees.

Workshops were held every week during the summer holidays with Barry Chang, who hails from the Black River area of St. Catherine’s, Jamaica, which is renowned across the island for its honey.

Barry has kept bees for more than 40 years and is so experienced he is able to work without a protective suit.

Honey extracted from the hives is being sold – with the income put back into the project to establish a sustainable model.

“Projects like this are exactly why I launched my Community Environment Fund. Taking big complex challenges like climate change and giving communities the space to empower, innovate and educate themselves on the world around them.

“From wildflower meadows and community farms, to improving air quality and producing Toxteth honey, people in all areas of our region are taking grassroots action to improve their local environment and ensure that our children grow up aware of the world around them and learning how to protect it.

“It’s been brilliant to see the impact that the Community Environment Fund has had. I’ve no doubt we’ll be seeing its ripple effects for years to come.” 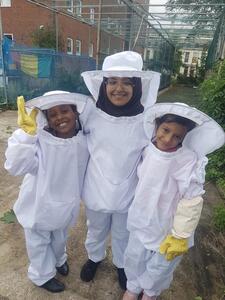 Anyanna Nduke from ACE, who applied for the Community Environment Fund grant said:

“It has been fascinating watching the beehives colonise with the help of the local community. We have enabled people who wouldn’t usually have the opportunity to look after a hive, to do so, and since the project started, a number of them have now joined the British Beekeepers Association.

“We’ve even been able to engage with primary school children in the area over the summer – our junior beekeepers – teaching them about biodiversity. It’s about empowerment and raising aspirations and we’ve enjoyed every minute.

“It’s been wonderful to see 25 children go from being fearful of bees to wanting to put on the bee suit and open the hive to see what’s going on.”

Save Our Bees was among 58 projects across Halton, Knowsley, Liverpool, Sefton, St Helens and Wirral that were supported by the £500k Community Environment Fund. These projects contribute to the city region’s green commitment by promoting community engagement in local programmes that lead to more awareness of environmental issues.